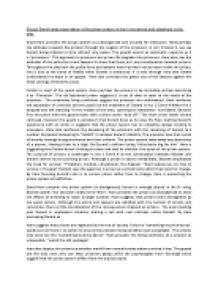 Discuss David Hare's presentation of the prison system in the in the extract and elsewhere in the play.

﻿Discuss David hares presentation of the prison system in the in the extract and elsewhere in the play. David Hare presents the prison system as a disorganised and uncared for institution. Hare portrays the attitudes towards the prisons through the neglect of the prisoners. In Act 1 Scene 4, we see Gerard being ordered to strip without any reason. The guards expect an automatic response as it is ?procedure?. This approach to prisoners and prison life degrades the prisoners. Hare also uses the attitudes of the police force and lawyers to show that there isn?t any consideration towards prisons. Throughout the play both the police force and lawyers have had their voices heard unlike the prison, this is due to the sense of finality when Gerard is sentenced. ...read more.

Gerard?s first encounter with the guards starts with a direct order ?strip off.? The short order leaves Gerard confused, however the guard is persistent that Gerard does as he says. By Hare starting Gerard?s experience with an order, it suggests that the prison system has no empathy; always sticking to procedure. Hare also reinforces the devaluing of the prisoners with the renaming of Gerard to a number. By Gerard answering to ?A6324? it replaces Gerard?s identity. The prisoners lose their sense of identity through being numbered and their uniform. The prison system takes away any distinction of a person, likening them to a digit. By Gerard?s uniform being ?ridiculously big for him? Hare is suggesting that Gerard doesn?t belong in prison and that he shouldn?t be a part of the prison system. ...read more.

Hare suggests that prisons were disregarded by the penal system. Although the police and lawyers are satisfied with the number of arrests and convictions there is little consideration of the consequences imposed on prisons. The overcrowding puts Gerard in unpleasant situation sharing a cell with real criminals unlike himself. By Hare portraying Gerard as Hare suggests that prisons are neglected by the rest of society. Only the ?something-must-be-dones? speak out but there is no action to ensure the prisoners living conditions are acceptable. The prisons only voice are the ?something-must-be-dones? Hare presents the living conditions of a prisoner as unbearable. ?watch the s**t packages? Hare also depicts the prisons as another world from normal society where survival is key. The guards are the only ones who can keep prisoners going unlike the psychologists from Oxbridge which suggest that the prison system differs from the outside world. ...read more.