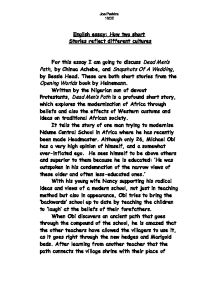 Discuss Dead Men's Path, by Chinua Achebe, and Snapshots Of A Wedding, by Bessie Head.

English essay: How two short Stories reflect different cultures For this essay I am going to discuss Dead Men's Path, by Chinua Achebe, and Snapshots Of A Wedding, by Bessie Head. These are both short stories from the Opening Worlds book by Heinemann. Written by the Nigerian son of devout Protestants, Dead Men's Path is a profound short story, which explores the modernisation of Africa through beliefs and also the effects of Western customs and ideas on traditional African society. It tells the story of one man trying to modernise Ndume Central School in Africa where he has recently been made Headmaster. Although only 26, Michael Obi has a very high opinion of himself, and a somewhat over-inflated ego. ...read more.

To prevent the villagers using this path, Obi plants heavy sticks topped with barbed wire at either end. Three days later the village priest visits him. He informs Obi that the whole life of the village depends on the path. He elaborates by saying that dead relatives depart by it, ancestors visit by it, but, most importantly, it is the path of children coming in to be born. Obi, however, is not to be swayed. He does not even acknowledge the old priest's ideas. He replies with 'Dead men do not require footpaths. The whole idea is just fantastic.' The priest, less academically educated but infinitely more wise, dignified and respectful, tells Obi that what he says may be true, but that he and his fellow villagers follow the beliefs of their forefathers. ...read more.

Mainly because she is educated and their note e.g. ''she was the only one to complete her 'O' levels and never failed to rub in this fact''. Her family and relatives can't wait to be rid of her. When Neo is six months pregnant her and kegoletile get married, but kegoletile marries Neo for her money, but is in love with Mathata. The wedding is a ''modern'' one ''A lot of traditional courtesies have been left out, such as someone staying up all night preparing diphire or traditional wedding breakfast'' The culture in this story is different to Dead mans path. This is less about a system of beliefs; the traditions they carry out in the story are purely just traditions nothing more. Joe Perkins 10CE ...read more.