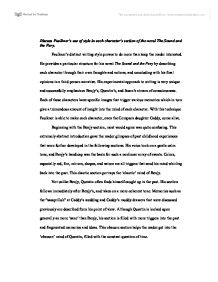 Discuss Faulkner&amp;#146;s use of style in each character&amp;#146;s section of the novel The Sound and the Fury.

Discuss Faulkner's use of style in each character's section of the novel The Sound and the Fury. Faulkner's distinct writing style proves to do more than keep the reader interested. He provides a particular structure for his novel The Sound and the Fury by describing each character through their own thoughts and actions; and concluding with his final opinions in a third person narrative. His experimental approach to writing is very unique and successfully emphasizes Benjy's, Quentin's, and Jason's stream of consciousness. Each of these characters have specific images that trigger various memories which in turn give a tremendous amount of insight into the mind of each character. With this technique Faulkner is able to make each character, even the Compson daughter Caddy, come alive. Beginning with the Benjy section, most would agree was quite confusing. This extremely abstract introduction gave the reader glimpses of past childhood experiences that were further developed in the following sections. ...read more.

In the end of this section his death is confirmed as a suicide (due to the Benjy section the reader already knows Quentin dies). Overall Quentin's voice is impassioned and convoluted. The third Compson brother to tell his story is Jason. His section is utterly different than that of his brothers Benjy and Quentin. All of his recollections are less vivid than the previous Compsons' and Jason's voice is very different too. He has a hurried voice that is nasty and vulgar. A number of Jason's passing comments fill in vague gaps between events that have been mentioned in the preceding sections. For example, Jason notices Benjy going to a dark place on the wall where the mirror used to hang. That explains an action in Benjy's section on page 74. All of his interest is in the present, however although Jason thinks that he can shuck off the past, he too, is in its grip. ...read more.

Compson is wearing, and that the house's front porch is falling down. It is interesting to note the abrupt change in style Faulkner uses. This is a clever way to integrate his own personal views and opinions of society into his tale of the Compson Family. Steinbeck has the same kind of ideas as to how and where to add his own thoughts. In his novel East of Eden, he chooses to have inter-chapters as he did in The Grapes of Wrath, however these chapters are solely filled with his thoughts and are in no way apart of the story. Faulkner is able to cleverly combine his story and thoughts into one conclusive section which deals with the overall thematic statements of the redeeming power of love. He is also able to point out his beliefs of where the new generation is going and how we need more Dilseys in the world and less Jasons. Quentins and Benjys are inevitable, however we need strong enduring people that can accept themselves and life at face value. ...read more.