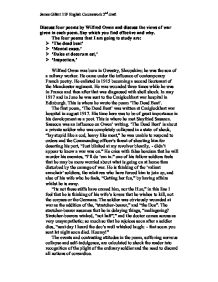 Discuss four poems by Wilfred Owen and discuss the views of war given in each poem. Say which you find effective and why.

Discuss four poems by Wilfred Owen and discuss the views of war given in each poem. Say which you find effective and why. The four poems that I am going to study are: > 'The dead beat' > 'Mental cases.' > 'Dulce et decorum est,' > 'Inspection,' Wilfred Owen was born in Owestry, Shropshire; he was the son of a railway worker. He came under the influence of contemporary French poetry. He enlisted in 1915 becoming a second lieutenant of the Manchester regiment. He was wounded three times while he was in France and then after that was diagnosed with shell shock. In may 1917 and in June he was sent to the Craiglockhart war hospital in Edinburgh. This is where he wrote the poem 'The Dead Beat'. The first poem, 'The Dead Beat' was written at Craiglockhart war hospital in august 1917. His time here was to be of great importance in his development as a poet. This is where he met Sieyfried Sassoon. Sassoon was an influence on Owen' writing. 'The Dead Beat' is about a private soldier who was completely collapsed in a state of shock, "lay stupid like a cod, heavy like meat," he was unable to respond to orders and the Commanding officer's threat of shooting him for deserting his port, "Just blinked at my revolver blearily, - didn't appear to know a war was on." ...read more.

The first verse attempts to give a description of how these "mental cases," look, introducing us to the men the war has created. The second verse illustrates the cause of the men's madness, linking it with combat in the war. The poetry here is filled with emotion and shocking detail. "Shatter of flying muscles". The poet tries to suggest the humanness of the victims, as opposed to the thought of them purely as statistics. "Treading blood from lungs that loved laughter". The line, "memories finger in their hair of murders," is a metaphor that compares their memories to a women, a female fatale, whose deadly embrace smothers them from within, where they cannot escape, "always they must see these things and hear them". In the final verse he brings the last two verses together, now that we know both cause and consequence and the last line sums up the theme of the poem, "pawing up who dealt them war and madness." The poet again brings up the subject of collective guilt, making clear that by not stopping the war we become responsible for the results, "snatching after us who smote them, brother." This poem is a shocking reminder of the mental toll of the war. If ever there was a war poem that reflected the war in its writing style then this is it. ...read more.

This poem is in the form of a dramatic dialogue between Owen as an officer and a soldier who had stain on his uniform, "you! What d'you mean by this?" I rapped. "You dare come on parade like this?" the soldier is punished and when later he tells the officer that the stain was blood, he is told that, "blood's dirt". The poem opens with the arresting accusation of the officer, which contrasts, with the hesitant reply of the soldier. The soldiers are sent to fight and die, but their blood, or the reality of war, is unsightly and must not be visible, even their youthful red cheeks must be bled white, "but when we're duly white-washed, being dead, the race will bear field-marshal God's inspection." And the sacrifice of the soldiers on behalf of warring nations is as hypocritical as trying to wash away the outward signs of sin like white washing an army barrack before a field marshals inspection. In conclusion, I think that all the poems attack different aspects of the Great War. They describe after effects of the war and what can happen, being in the frontline in the wet horrendous trenches, preparation for a war with the inspections and how much work a soldier has to do, which then leads the soldier into exhaustion and an ill state of mind. James Gillett 11F English Coursework 2nd draft ...read more.