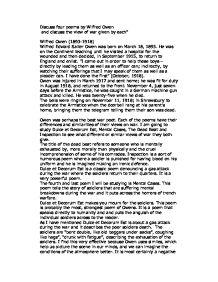 Discuss four poems by Wilfred Owen and discuss the view of war given by each" Wilfred Owen (1893-1918) Wilfred Edward Salter Owen was born on March 18, 1893. He was on the Continent teaching until he visited a hospital for the wounded and then decided, in September 1915, to return to England and enlist. "I came out in order to help these boys-- directly by leading them as well as an officer can; indirectly, by watching their sufferings that I may speak of them as well as a pleader can. I have done the first" (October, 1918). Owen was injured in March 1917 and sent home; he was fit for duty in August 1918, and returned to the front. November 4, just seven days before the Armistice, he was caught in a German machine gun attack and killed. He was twenty-five when he died. The bells were ringing on November 11, 1918; in Shrewsbury to celebrate the Armistice when the doorbell rang at his parent's home, bringing them the telegram telling them their son was dead. Owen was perhaps the best war poet. ...read more.

Owen says, " Dim through the misty panes and thick green light, as under a green sea, I saw him drowning" Colours create the illusion that the man is drowning very imaginatively. He imagines the "misty panes" which mean that he has some sort of visual befuddlement or that there is no way out and then there is "thick green light" which could either describe the colour of the gas or what the atmosphere was like. The light Owen describes is the same as "under a green sea". Owen refers to the colour green again but he also uses a Simile, which is another good way of describing the atmosphere and the reader gets to feel the conditions and fell what it was like. Stanza 3 is set apart from the rest of the poem, which gives it a greater impact and a greater immediacy. It draws the reader's attention and stands out from the rest of the page. It is where Owen begins to have flashbacks of the man drowning, it shows that it has left a deep impression on him. The man that was "drowning in the gas was "helpless" and Owen feels he is guilty of his death because he could not help him. ...read more.

Also Owen includes a number of question marks at the end of some of the lines. He is posing the rhetorical question to the reader and then he answers it within the next few lines. I think this is effective as it makes the reader think, "Who are these hellish?" The soldiers are unaware of their surroundings and are suffering from shell shock, Owen thinks he had died in his sleep and has gone to Hell because of the ferocity of the environment. Owen says "they pick meaninglessly at each other"- but Owen does see a meaning. The men's appearances are worsened in stanza 2 when Owen delves deeper into the appearances of the soldiers. "Memory fingers in their hair of murders", "wading slough's of flesh these helpless wander", "treading blood from lungs that have loved laughter. I find that Owens comment about the wading flesh is significant. It sets the tone for what happens and the picture created in the reader's brain is gruesome. The amount of blood is also emphasized. "the sunlight seems a bloods smear; night comes blood black; dawn breaks open like a wound that bleeds afresh. Owen attacks the people that have sent him to war, "pawing" at them with endless hand movements. ...read more.