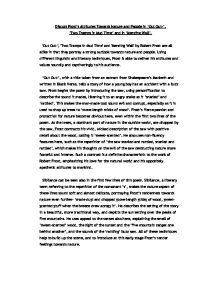 Discuss Frost's Attitudes Towards Nature and People in 'Out Out-', 'Two Tramps in Mud Time' and in 'Mending Wall'

Discuss Frost's Attitudes Towards Nature and People in 'Out Out-', 'Two Tramps in Mud Time' and in 'Mending Wall'. 'Out Out-', 'Two Tramps in Mud Time' and 'Mending Wall' by Robert Frost are all alike in that they portray a strong outlook towards nature and people. Using different linguistic and literary techniques, Frost is able to deliver his attitudes and values soundly and captivatingly to his audience. 'Out Out-', with a title taken from an extract from Shakespeare's Macbeth and written in Blank Verse, tells a story of how a young boy has an accident with a buzz saw. Frost begins the poem by introducing the saw, using personification to describe the sound it mades, likening it to an angry snake as it 'snarled' and 'rattled'. This makes the man-made tool sound evil and corrupt, especially as it is used to chop up trees to 'stove-length sticks of wood'. Frost's fierce passion and protection for nature becomes obvious here, even within the first two lines of the poem. ...read more.

Reverting the peaceful tone, the poem now sounds tense and edgy, foreshadowing the upcoming tragedy. As the boy's sister calls him to 'Supper', the boy is distracted and loses control of the saw as it cuts into his hand. Frost uses a metonymy, in which a figure of speech that uses a concept closely related to what is actually meant is used, making the analogy more vivid and meaningful- 'Holding up his hand... as if to keep the life from spilling'. This shows Frost's attitude towards people and life. By just cutting open his hand, the boy is losing not only blood but his actual life too, showing that Frost values life and sees it as very precious. This is contrasted, however, in the next lines of the poem as Frost goes on to make a mockery out of people and their views on life as compared to his own views on life. Frightened that the doctor will have to amputate his hand, the young boy pleads with his sister to not let the doctor amputate his hand. ...read more.

The poem beings with the line 'Something there is that doesn't love a wall'. It is unclear who or what this 'something' is referring to, adding a slight mysterious slant to the poem. Rather than except the logical explanation of the wall being damaged by hunters, Frost instead explains that it must be nature at work, trying to destroy the wall as it, like Frost but unlike the neighbour, realises how wrong having a wall is. The line 'Sends the frozen-ground-swell under it' gives the idea that frost is why the wall becomes damaged and cracked. This shows Frost's attitude towards nature, in that nature realises the wall is pointless and unnecessarily divides the two men, and tries to resolve the problem, once again reflecting Frost's fondness towards nature. It contracts with the neighbour, as although the neighbour as a human being is supposed to be intelligent, Frost sees the nature as more intelligent in that it understands the ridiculousness of the wall, as Frost does. ...read more.