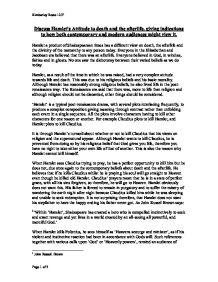 Discuss Hamlet's attitude to death and the afterlife, giving indications to how both contemporary and modern audiences might view it.

Discuss Hamlet's Attitude to death and the afterlife, giving indications to how both contemporary and modern audiences might view it. Hamlet a product of Shakespearean times has a different view on death, the afterlife and the divinity of the monarchy to any person today. Everyone in the Elizabethan and Jacobean era believed that there was an afterlife. Everyone believed in God, in witches, fairies and in ghosts. No one saw the dichotomy between their varied beliefs as we do today. Hamlet, as a result of the time in which he was raised, had a very complex attitude towards life and death. This was due to his religious beliefs and his basic morality. Although Hamlet has reasonably strong religious beliefs, he also lived life in the post- renaissance way. The Renaissance era said that there was, more to life than religion and although religion should not be discarded, other things should be considered. 'Hamlet' is a typical post-renaissance drama, with several plots interlacing frequently, to produce a complex composition giving meaning through contrast rather than unfolding each event in a single sequence. All the plots involve characters having to kill other characters for one reason or another. For example Claudius plots to kill Hamlet, and Hamlet plots to kill Claudius. It is through Hamlet's turmoil about whether or not to kill Claudius that his views on religion and the supernatural appear. ...read more.

Both of them see the ghost on the battlement as do Barnado, Francisco and also Marcellus who sees its appearance as a sign that something is rotten in the state of Denmark. Although Gertrude never sees the Ghost, its validity and existence is proven by the fact that both Hamlet and Horatio have seen it. 2 The fact that Gertrude has an inability to see the Ghost might suggest the fact that she had nothing to do with the murder of old Hamlet or that she is too insensitive to see it - an idea born out by her insensitively speedy marriage to Claudius. This also appears to be the case in MACBETH another of Shakespeare's plays, in the banquet scene, when the guilty Macbeth sees the ghost of Banquo but no one else does. As a result of the information Hamlet receives from his father about his death, and his mother's behavior, Hamlet feels that life in Denmark is worthless. He feels now with the death of his father, and the incestuous he feels relationship between his mother and Claudius, that his life is also meaningless and worthless thus he discusses committing suicide. 'O, that this too too solid flesh would melt, thaw, and resolve itself into a dew'. He then describes how distraught he is that his father was only dead a month when his mother got married to Claudius, and how he must 'hold his tongue'. ...read more.

Hamlet has fulfilled his father's wishes in reeking revenge on Claudius, but his mother is murdered accidentally in the process, something which old Hamlet does not want. His success is therefore only partial. In addition because he, Hamlet, dies at Laertes' hands, Denmark is left without a native heir, as is bequethed by Hamlet to the foreigner Fortinbras. The consequence of all these deaths is therefore very serious. Ophelia is seen as a character not worthy of a proper Christian burial because she killed herself. Personally I feel that Claudius is the character who is least worthy of such a burial as he is the instigator of everyone's problems. In addition he is the cause of Gertrude, Hamlet and Laertes' deaths, as it his idea to stage the sword fight and poison the chalice from which Gertrude inadvertently sips. Having looked at all the critics' comments and from my own understanding of the play, I would sum up Hamlet's attitude to death and the afterlife, as being that of a religious man. He believes that many people would commit suicide if they were not so scared of the consequences of their actions in the afterlife because he also believes that God gave us our lives therefore they are not our own to take away. His conflicting concerns not to offend God and carry out the will of his dead father are what make this such a complex and interesting play. 1 John Russell Brown 2 Ann Thompson + Neil Taylor 3 York Notes ?? Kimberley Rosie 12JF Page 5 of 5 ...read more.