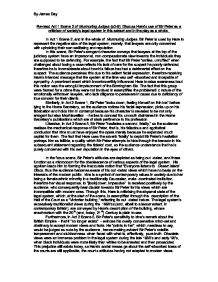 Discuss Hares use of Sir Peter as a criticism of societys legal system in Act 1 Scene 2 and in 'Murmuring Judges' as a whole.

Re-read Act 1 Scene 2 of Murmuring Judges (p3-9). Discuss Hare's use of Sir Peter as a criticism of society's legal system in this extract and in the play as a whole. In Act 1 Scene 2, and in the whole of Murmuring Judges, Sir Peter is used by Hare to represent the negative side of the legal system; namely, that lawyers are only concerned with upholding their own wellbeing and reputation. In this scene, Sir Peter's arrogant character conveys that lawyers at the top of the judiciary system have an impersonal, non-compassionate view towards the individuals they are supposed to be defending. For example, the fact that Sir Peter "smiles, unruffled" when challenged about losing a case reflects his lack of care for the suspect he poorly defended, therefore he is inconsiderate about how his failure has had a detrimental effect on the suspect. The audience perceives this due to his salient facial expression, therefore receiving Hare's intended message that the system at the time was self-absorbed and incapable of sympathy. ...read more.

The fact that Hare uses the adverb 'fatally' to depict Sir Peter's hesitation portrays him as fallible, a quality which Sir Peter attempts to hide through the bravado in his subsequent statement regarding the tickets' cost, so the audience understands that he is purely concerned with his own reputation in the eyes of others. In the focus scene, Sir Peter's attitudes are depicted as being out-dated, and these function as a microcosm for the obsolescence of various aspects of the legal system. His egotism leads him to forming the inaccurate notion that "Everyone listens to Desert Island Discs, thus the audience becomes aware of his out-dated views which have no basis on the interests of the modern public. Irina is a symbol of contemporary values in society due to her being a female ethnic minority in a traditionally Caucasian, male-dominated institution, therefore her visual response, to "[look] down, impassive" is received positively by the audience, who consequently bear disdain towards Sir Peter for his views which are incompatible with modern ones. ...read more.

This prejudice still exists today, so Hare's social message about the self-absorbed ideas of the courts are still applicable, the courts attitudes having not adapted to modern views. Likewise, Sir Peter's lack of interest in the statistics ostensibly circulated to him by the Home Secretary appertaining Germany and Sweden is another example of his nonchalance regarding contemporary attitudes, because Germany and Sweden were and still are considered two of the most liberal, 'modern' nations in the world and so their methods of tackling crime would likely involve modern points of view, ones which Sir Peter takes no interest in because they are not of immediate relevance to the way the courts are run in this country. Hare is thus portraying Sir Peter as somewhat xenophobic and nationalistic, traits which, in the rapidly increasingly liberal British society of the early 1990's, were being minimised, so the audience perceives Sir Peter, and the courts in general as a consequence, as incompatible with modern Britain. ?? ?? ?? ?? By James Day ...read more.