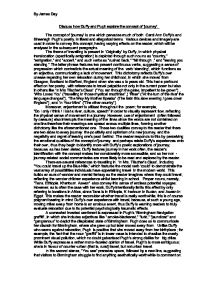 Discuss how Carol Ann Duffy and Sheenagh Pugh explore the concept of &quot;journey&quot; in their poetry.

Discuss how Duffy and Pugh explore the concept of 'journey'. The concept of 'journey' is one which pervades much of both Carol Ann Duffy's and Sheenagh Pugh's poetry, in literal and allegorical terms. Various devices and imagery are used in order to convey this concept, having varying effects on the reader, which will be analysed in the subsequent paragraphs. The theme of travelling is present in 'Originally' by Duffy, in which physical translocation (specifically emigration) is depicted through such nouns as "country," "emigration," and "accent," and such verbs as "rushed back," "fell through," and "leaving you standing." The latter phrase features two present continuous verbs, suggesting a sense of progression which contradicts the actual meaning of the verb 'standing', which functions as an adjective, communicating a lack of movement. This dichotomy reflects Duffy's own unease regarding her own relocation during her childhood, in which she moved from Glasgow, Scotland to Stafford, England when she was six years old. This had a profound effect on her poetry, with references to travel palpable not only in the current poem but also in others like ...read more.

This builds an aura of wonder and mental fantasy as the reader imagines where they could travel, reflecting the wonder children experience whilst learning in school. Proper nouns, namely, "Tana. Ethiopia. Khartoum. Aswan" also convey this sense of endless potential voyages. However, as is often the case with her work, Duffy intentionally limits this effect by only referring to locations in Africa, since Tana is in Ethiopia, Khartoum in Sudan, and Aswan in Egypt. This makes the reader reconsider whether travel is really worthwhile; this is of course poignant bearing in mind Duffy's own experience with travel, because, at such a young age, moving miles away from home is an anxious event, thus Duffy is warning readers to truly evaluate relocation due to its potential psychologically traumatic effects. A somewhat inverted sentiment is expressed in Pugh's 'Birmingham Navigation graffiti', in which she includes adjectives like "smoke-blackened," "lurid," "jaundiced" and "gangrenous" to depict the dilapidated state of Birmingham. Pugh does so to communicate her disdain for Birmingham, where she grew up but later moved away from. ...read more.

In "In Mrs. Tilscher's Class" the number of travel-related ideas diminishes as the poem progresses, conveying, in her eyes, the lack of imagination and exploration the children in the poem face as they grow up. This links strongly to the theme of maturity. Running parallel to the theme of physical journey is that of journey from innocence and youth to knowledge and maturity, which is explored in 'Religion 1', wherein the transition from nescience to knowledge is depicted through the subtle sexual reference of, "some thing / well-shaped; uncommon; fashioned to their liking." Needless to say, this is a reference to temptation in the Garden of Eden in the Genesis story of Adam and Eve, and the use of the nonspecific adverb 'some' suggests lack of knowledge, which is antithetical to the subsequent knowledge they experience; the verb 'know' (present in the subsequent poem in 'Selected Poems', 'History 1') can mean, in a Biblical sense, 'copulate', thus this is a subtle reference to sexual maturity and discovery. ...read more.