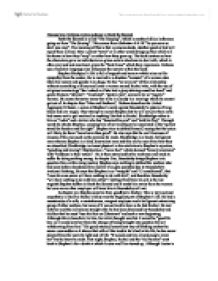 Discuss how Dickens creates sadness in Book the Second

Discuss how Dickens creates sadness in Book the Second Book the Second is called "The Reaping", which is another biblical reference going on from "The Sowing". This comes from Galatians 6:6-18 "As you sow so shall you reap". The meaning of this is that a persons deeds, whether good or bad will repay them in kind. How a parent "sows" or in other words brings up their child will be shown in how they "reap" or rather how they grow up. The book centres on how the characters grow as individuals are given certain situations to deal with, which is often very sad and emotional given the "hard times" which they experience. Dickens use of emotive language also influences the sorrow within the book. Stephan Blackpool's life is full of anguish and sorrow which cries out for sympathy from the reader. He is married to a drunken "monster" of a woman who takes his money and spends it on drugs. He has "no way out" of this relationship without committing a felony and loves a woman named Rachel who, with the use of religious terminology "she looked as if she had a glory shining round her head" and gentle features "delicate", "irradiated", "gentle eyes", seems to be an "angelic" woman. He cannot however marry her as he is already in a marriage which he cannot get out of. In chapter four "Men and Brothers", Dickens describes the United Aggregate Tribunal, a union at Stephan's work against Bounderby's system of long hours and low wages. ...read more.

Within the conversation between Louisa and her mother, Mrs Gradgrind often goes very "silent" for periods of time and has an "awful lull on her face, like one who was floating away on some great water" and "content to be carried down the stream". This clever piece of descriptions meaning is that Mrs Gradgrind is slowly allowing herself to be carried into the "abyss" of death. But Louisa "recalls her" to ask what it was she wanted to speak to her about. The use of this river terminology is used again as Louisa again tries to stop her mother from "floating away". Mrs Gradgrind is troubled because of what Louisa has not learned. She has learnt all the "ologies" from "day until night" but there is "something that her father missed," She asked Louisa for a pen but "even the power of relentlessness had gone". Even so, she "fancied that her request had been complied with and that the pen she could not have was held in her hand". From this she began to "trace upon her wrappers". It is very sad to see how Mrs Gradgrind is finally seeing the truth and wants Louisa too to see it but she cannot tell her and "the light that had always been so feeble and dim behind the weak transparency, went out" The figurative language used to describe both her weakness and death creates a solemn, melancholy surrounding and although she was never made to be a character the reader was so fond of, it is still saddening that she has passed away. ...read more.

She asks him whether he would have "doomed her" to a life of loneliness or "robbed her" of how she should have been had he nurtured her differently if he could see how she would turn out. She then states that if he had ignored and hated her, how better off she might have been as she would have been "free". She has been won over to the world of imagination and fancy. Throughout the chapter, he moves to support her as she is letting herself out and he actually begins to give her attention and love as a good father should. It is ironic that his child who he has taught his system to is the child who shows how insensible it really is. To conclude, Dickens uses language and dramatic disasters to create sadness throughout the second book. In 1854, the time at which the book was written, people loved romantic tragedy and trauma which the second book has with both Rachel and Stephan, and Mr Harthouse and Louisa. The death of Mrs Gradgrind is another tragedy which Dickens portrays well and is very emotional. He uses the metaphor of life as a river in which we all just drift down until the end and these uses of language as well as others he uses throughout the book are methods which Dickens uses to sadden the reader. The final scene in which Louisa lets out her emotions upon her father, condemning the day she was born and questioning his motives which lead her to be so dispassionate. ...read more.