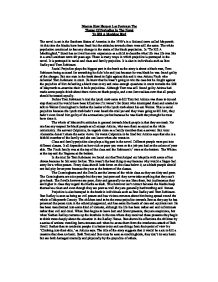 Discuss How Harper Lee Portrays The Theme Of Prejudice In The Novel To Kill A Mocking Bird.

Discuss How Harper Lee Portrays The Theme Of Prejudice In The Novel To Kill A Mocking Bird The novel is set in the Southern States of America in the 1930's in a fictional town called Maycomb. At this time the blacks have been freed but the attitudes towards them were still the same. The white population continued to fear any change in the status of the black population. In "To Kill A Mockingbird," Scout has re-lived her own experience as a child to describe what life was life was like in a small southern town 40 years ago. There is many ways in which prejudice is portrayed in the novel. It is portrayed in racial and class and family prejudice. It is also in individuals such as Boo Radley and Tom Robinson. Racial Prejudice plays the biggest part in the book as the story is about a black man, Tom Robinson being accused for something he didn't do and just because he was black he was found guilty of the charges. ...read more.

The whole of Macomb's attitudes in general towards black people is that they are trash. No one has any respect for black people at all except Atticus, who sees them as equal as the white community. His servant Calpurnia, he regards more as a family member than a servant. But Aunt Alexandra doesn't share the same views. He wants Calpurnia to be fired but Atticus says that she is a faithful member of the family and she can leave when she wants to. Class and family prejudice also plays a big part in the novel. Different people were put into different classes. It all depended on how rich or poor you were or the job you had or the colour of your skin. The Finch family was at the top of the class and the Robinson's' were at the bottom. The Whites at the top and the n*****s at the bottom. In the trial for Tom Robinson we found out that Tom helped out Mayella with some of her chores because he felt sorry for her. ...read more.

The children tend to be the most prejudice towards Boo as they say he has poisoned the pecan nuts in the school playground, and has eaten the heads of cats and squirrels raw. He has been transformed into some kind of monster, although his life has been rather sad and unfortunate rather than evil and cruel. When Boo begins to leave Jem and Scout presents, they are suspicious, but when Nathan Radley cements up the knothole in the tree where they received these presents they begin to think more deeply about the situation in the Radley House. Boo shows his affections the children by a series of actions: mending Jems trousers and when he saves them from the murderous attack of Bob Ewell. Rather than to condemn people it is better to try and see things from their point of view by 'Climbing into their skin,' as Atticus says. The title of the story suggests that it would be a sin to kill a creature that does no harm. Both Tom and Boo may be seen as mockingbirds, they don't do any harm but are both damaged mentally and physically by the prejudice of others. ...read more.