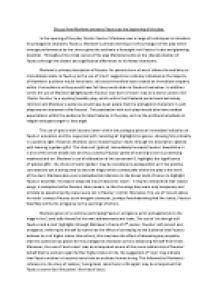 Discuss how Marlowe presents Faustus at the beginning of the play

﻿Discuss how Marlowe presents Faustus at the beginning of the play. In the opening of the play ?Doctor Faustus? Marlowe uses a range of techniques to introduce his protagonist character, Faustus. Marlowe?s primary technique is the prologue of the play which through performance by the chorus gives the audience a foresight into Faustus? traits and glooming downfall. Throughout the initial scenes of the play Marlowe builds on the characterisation of Faustus through the dialect and significance differences to his fellow characters. Marlowe?s primary description of Faustus ?his parents born of stock? allows the audience to immediately relate to Faustus; as the use of ?stock? suggests an ordinary individual as the majority of Marlowe?s audience would have been, this would therefore have created an immediate empathy within the audience as they would have felt they could relate to Faustus themselves. In addition to this the use of Marlow highlighting the Faustus was ?born of stock? may be a device used to link ?Doctor Faustus? to a mystery/morality play, which within the Medieval period were extremely common and Marlowe?s audience would have been aware that the protagonist characters in such plays was an everyman a like Faustus. ...read more.

audience that Faustus believes he is of higher status than others; this may have the effect of alienating any empathy that the audience has grown for the protagonist character as he is distancing himself from them. Moreover, the use of ?and a man? may be interpreted as one of the more subtle hints of Faustus? behalf that he wishes to gain further higher status in life, the suggestion of ?man? may indicate that Faustus wishes to become more than an ordinary human being. This followed by Marlowe?s reference to the story of Lazarus, ?being dead, raise them to life again? may be interpreted that Faustus craves God like power, like that of Jesus. However, Marlowe has Faustus contradict his own beliefs as he goes on to dismiss all forms of religion ?Divinity, adieu? therefore through the dismissal of religion he dismisses beliefs in God of which he has previously stated he wishes to become like. Moreover, through the dismissal of his religion Faustus is dismissing the medieval period that was dominated by religion and would have been present throughout Marlowe?s society at the time of both writing and performing the play. ...read more.

The fact that Faustus is either blatantly ignoring or choosing to ignore the warnings given by Mephastophilli?s not only highlights he arrogance and again links him to the myth of Icarus, yet it also creates an under laying comedy. Mephastophilli?s blatantly describes ?why, this is h**l, nor am I out of it? yet Faustus is still convinced despite summoning an actual devil that h**l is ?in Elysium?, which although to Marlowe?s initial audience would have been extremely seriousness and threatening, to a modern day audience the juxtaposition may be considered comical at the expense of Faustus? stubbornness. Overall, the beginning of the play casts Faustus as a Renaissance man, preoccupied with a fascination of magic and determination to not only conjure a devil but magic also. The beginning although at first creating an empathy between the audience and the protagonist through the similarity of ?stock? backgrounds, foremost creates a wedge between the audience and Faustus, as they are introduced by Marlowe to the arrogant character who is ?glutted? with a desire for lives ?golden gifts?. The beginning of the novel succeeds in creating tension as to what will happen to the protagonist character and a foreshadowing that his sin will in fact be the source of his impending downfall. ...read more.