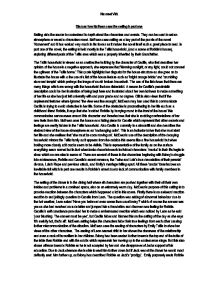 Discuss how McEwan uses the setting in part one of &quot;Atonement&quot;.

Discuss how McEwan uses the setting in part one Setting aids the reader to understand in depth about the characters and events. They can be used to set an atmosphere or reveal a characters mood. McEwan uses setting as a key part of the puzzle of the novel 'Atonement' and it has worked very much in his favour as it makes the novel itself such a great piece to read. In part one of the novel, the setting is held mostly in the Tallis household, (and a scene at Robbie's house), exploring different parts of the Tallis area which was a property inherited by their Grandfather. The Tallis household is viewed as an unattractive building by the character of Cecilia, who first describes her opinion of the house in a negative approach, she expresses that 'Morning sunlight, or any light, could not conceal the ugliness of the Tallis home.' This quote highlights her disgusts for the house structure as she goes on to illustrate the house with a the use of a list of the house feature such as 'bright orange bricks' and 'crumbling stuccoed temple' which portrays the image of an old broken household. The use of the list shows that there are many things which are wrong with the household that are distasteful. ...read more.

This is shown through McEwan's use of third person narrative from Robbie as he expresses 'Cecilia's bare arm at his side - he could feel its heat', this shows that his thought process of Cecilia is now s****l which is making him nervous. Cecilia frustration with Briony's behaviour, also her having to stay in the dining hall without being able to run away or hide in the house, results in a sudden outburst at Briony. She overreacts to a comment made from Briony about the twins wearing her socks. Punctuation is used here to show anger, as she replies 'Shut up. For goodness sake!' The use of the exclamation mark shows her annoyance towards Briony and her getting herself involved in places she need not, as Briony has just interrupted her intimate moment with Robbie. McEwan uses dramatic irony in Emily's dialogue as she says to the twins 'No secrets at the dinner table boys', this is not the case as the audience know that most of the characters in the dining room have secrets but everyone is oblivious to this. The Greek temple in the Island which is surrounded by the lake was meant to be a symbolic replica of a religious artefact. Instead McEwan highlights that this had not been properly looked after and forgotten about 'ornament so familiar as to be invisible' by all member of the Tallis family but Briony. ...read more.

All these events which occur have been set on 'the hottest day in 1935', McEwan's purpose of setting it on this day could be to symbolise that this is a very memorable day for all the characters in the novel. Every character had been affected in same way on this day, and the Tallis household had been completely changed and broken down on this day. McEwan's purpose of the use of this setting caused the characters to react in the heat of the moment, not as they usually would. Everything was unusual from the day from the cousins arriving, the news of a divorce which was highly unlikely and frowned upon at that time, the twins running away, the r**e of Lola, and the fountain scene, all these even had a life changing impact on all the characters. The setting used in part one was used constructively to build depth into the novel. I find the use of setting makes it very much a more interesting read as I can see more depth into the story every time I read it. There are parts about the set which I didn't realise meant anything until I had re-read and studied the book. McEwan use of the setting makes the significance of the events more meaningful. As all the events that happen are set in a symbolic to that situation and the setting mirrors the meanings of the characters and the events. ?? ?? ?? ?? Navneet Virk ...read more.