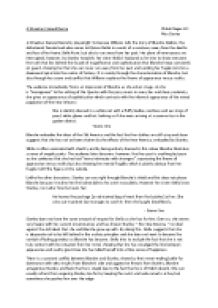 Discuss how Tennessee Williams explores the theme of appearance versus reality in his play &quot;A Streetcar Named Desire&quot;

ï»¿A Streetcar Named Desire Chloé Magee 4O Miss Davies A Streetcar Named Desire by playwright Tennessee Williams tells the story of Blanche DuBois, the dichotomist female lead who comes to Elysian Fields in search of a sanctuary away from the deaths and loss of her home, Belle Reve, but also to run away from her past. Her plans of inner-peace are interrupted, however, by Stanley Kowalski, her sister Stella’s husband as he tries to show everyone the truth that lies behind the facade of magnificence and sophistication that Blanche keeps constantly on guard, showing her that she can never run away from her past and sending her fragile mind on a downward spiral into the realms of fantasy. It is mainly through the characterisation of Blanche, but also through key scene and conflict that Williams explores the theme of appearance versus reality. The audience immediately forms an impression of Blanche as she enters stage. As she is “incongruous” to the setting of the Quarter with the jazzy music in every bar and sleazy notoriety, she gives an appearance of sophistication ...read more.

By doing this, Stella suggests that she is desperate not to be left behind in the archaic principles and she does not want to become the symbol of fading grandeur as Blanche has become. Stella tries to exclude the fact that she is not truly content with her situation from her mind, showing that she has smudged the line between appearance and reality given how she has lulled herself into a false sense of happiness. There is a constant conflict between Blanche and Stanley, shown by their never-ending battle for dominance with witty insults from Blanche?s side and aggressive threats from Stanley. Blanche antagonises Stanley and feels that he is stupid due to the fact that he is of Polish decent. She can usually refrain from angering Stanley too far by keeping the r****t and rude remarks at bay but sometimes she pushes him over the edge: Blanche: These are love-letters, yellowing with antiquity... Stanley: [he snatches them] I?ll have a look at them first! ...read more.

In a last attempt to prove to Blanche that she will never be able conquer his masculinity, he tries to attack her. The animalistic way in which he does this is reflected by the ?jungle noises? that echo around them. In the struggle Blanche is brutally brought down to the reality of her situation as she tries to protect herself. However she is easily overpowered and this scene closes with Blanche?s ?inert figure? in Stanley?s arms as he rapes her: the final hurdle for Stanley is his s****l superiority over Blanche. In conclusion, Williams is effectively able to convey Blanche Dubois, a woman who in herself is the theme of appearance versus reality as she is determined to convey an appearance which masks her harrowing truth. The tragedy of her situation is demonstrated in the words ?I have always depended on the kindness of strangers? and this regrettable statement brings the audience to realise that Blanche could have been saved from insanity, for all she really wanted was the consideration she deserved as a human broken over time. Words: 993 ...read more.