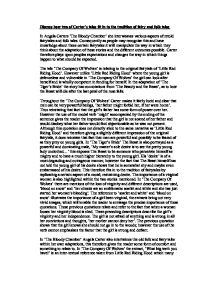 Discuss how two of Carter's tales fit in to the tradition of fairy and folk tales In Angela Carters 'The Bloody Chamber' she interweaves various aspects of retold fairytales and folk tales. Consequently as people may recognise this and have knowledge about these certain fairytales it will manipulate the way in which they think about the adaptation of these stories and the different outcomes possible. Carter therefore plays upon peoples expectations and changes the way in which things happen to what should be expected. The tale 'The Company Of Wolves' is relating to the original fairytale of 'Little Red Riding Hood'. However unlike 'Little Red Riding Hood' where the young girl is defenceless and vulnerable in 'The Company Of Wolves' the girl can look after herself and is wholly competent in fending for herself. In the adaptation of 'The Tiger's Bride' the story has connotations from 'The Beauty and the Beast', as to how the Beast will die after the last petal of the rose falls. Throughout the 'The Company Of Wolves' Carter makes it fairly lucid and clear that men can be very powerful beings, 'her father might forbid her, if her were home'. ...read more.

happens is he does not pose as the young girls grandmother and he does not eat the young girl, however they talk and express their feelings and desire for one another. The reader will therefore be taken aback by the change in the narrative, as Angela Carter wants to challenge all the diverse preconceptions. In 'The Tiger's Bride' there are many references in which a person that may know the story of 'Beauty and the Beast' will be able to relate to and understand to be from the fairytale. 'he wears a wig, too, false hair tied at the nape with a bow' this description for anyone that will have heard the story will fit in perfectly and allow them to realise that the character is somewhat the same person. The symbolism of the rose is also highly important, 'a bunch of his master's damned white roses' in 'Beauty and the Beast' roses are also mentioned and are a key symbol, as after the rose looses all its petals the Beast will die. The roses are also white which fits in to the whole virginal girl as well. In 'The Company Of Wolves' there are also many different extracts and quotations from 'Little Red Riding Hood'. ...read more.

One aspect of the oral tradition is thoroughly explain a certain attribute to a character or place to hold the listeners attention and make sure that they manage to create the right image, without fully explaining and describing this place or character the listener may not get the right impression or miss certain attributes to this place or character. 'The Company Of Wolves' manages to do this by spending a whole paragraph that explains the wolves eyes. Another aspect and feature of the oral tradition is using onomatopoeia. 'The Company Of Wolves' incorporates this in to the exposition of the fairytale to make the reader feel involved in the story 'Quack, quack! went the duck..' this also will allow the reader to imagine that they were a member of the story. However also in the fairytale itself there is use of onomatopoeia, 'Rat-a-tap-tap' this therefore continues the involvement of the reader and will keep them motivated and stimulated. There is also use of proverbs within the exposition, 'Fear and flee the wolf; for, worst of all, the wolf may be more than he seems'. This gives the reader the idea that they should be fearful of wolves, and in true oral tradition terms the moral will be passed down generation by generation. ...read more.