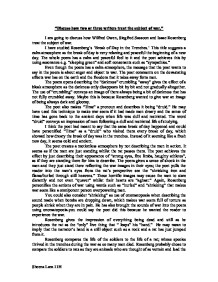 &quot;Discuss how two or three writers treat the subject of war.&quot;

"Discuss how two or three writers treat the subject of war." I am going to discuss how Wilfred Owen, Siegfred Sassoon and Isaac Rosenberg treat the subject of war. I have studied Rosenberg's 'Break of Day in the Trenches.' This title suggests a calm atmosphere as the break of day is very relaxing and peaceful the beginning of a new day. The whole poem has a calm and peaceful feel to it and the poet achieves this by using assonance e.g. "sleeping green" and soft consonants such as "sympathies." Even though the poem has a calm atmosphere, the message that the poet wants to say in the poem is about anger and object to war. The poet comments on the devastating effects war has on the earth and the freedom that it takes away form men. The poem opens describing the "darkness" crumbling "away" gives the effect of a bleak atmosphere as the darkness only disappears bit by bit and not gradually altogether. The use of "crumbling" conveys an image of there always being a bit of darkness that has not fully crumbled away. Maybe this is because Rosenberg wanted to give war an image of being always dark and gloomy. The poet also makes "Time" a pronoun and describes it being "druid." He may have used this technique to make war seem if it had made men dreary and the sense of time has gone back to the ancient days when life was dull and restricted. The word "druid" conveys an impression of men following a dull and restricted life of studying. I think the poet had meant to say that the same break of day happened and could have personified "Time" as a "druid" who visited them every break of day, which showed how dreary the break of day was in the trenches. Instead of it seeming like a fresh new day, it seems cold and ancient. ...read more.

You could also say that the tone create by the poem is very serious and directed towards the reader. This effect is achieved when the narrator talks to the reader by using the terms "you". The tone of the poem helps the reader to take the subject matters discussed in the poem seriously so that after having read the poem the reader will dislike war and be pitiful in all those people involved in war. Throughout the poem, the ends of the lines often are ended in enjambment, semi-colons, commas and dashes. This type of punctuation is also used in 'Break of Day in the trenches", which makes the effect of the many terrible events in war seem like a list and is on going. The rhyme also contributes to the poem to makes it seem as if it is continuous. The rhyme scheme of A, B, A, B gives it a marching rhythm giving the effect of soldiers ever marching in war. You could say that the punctuation has made the point made by the poet more significant; the poet plainly exposes the line "dulce et decorum est pro patria mori" using a colon to introduce this ending. You could say that the isolation of the line at the end makes it more memorable and meaningful to the reader. After having read the poem 'Dulce et Decorum est' I think the main subject matter of war Wilfred Owen wants to state is the misunderstanding of the severity of the pities of war. He wants to show his anger that people are being treated inhumanely by encouraging them to fight in the war when all their reward is their own death. After reading all three poems, I have learned that most war poets feel angry about sending people to war when all they get in return is death; disliking people who have not experienced the hardship of war and thinking it is very patriotic. I have also learned that most war poets think that there will always be war because some people think war is unavoidable. Sheena Lam 11H ...read more.