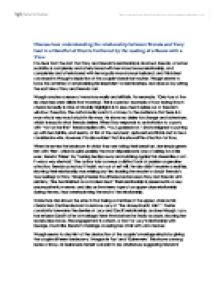 Discuss how understanding the relationship between Brenda and Tony Last in a Handful of Dust is furthered by the reading of a Room with a View It is clear from the start that Tony and Brenda's relationship is doomed. Brenda, a former socialite, is completely and utterly bored with her monotonous relationship, and completely and utterly bored with her equally monotonous husband, and this is best conveyed in Waugh's depiction of the couple's breakfast routine. Waugh seems to have the ambition of emphasizing his skepticism for relationships, and does so by writing the sad tale of Tony and Brenda Last. Waugh creates a sense of monotony easily and skillfully. For example, "Only four of the six churches were visible that morning". This is a perfect example of how boring Tony's character really is. One of his daily highlights is to see church spires out of Brenda's window. Everyday. The author really wants to convey to the audience that here is a man who is very much stuck in his ways. He shows no desire for change and adventure, which is exactly what Brenda desires. When Tony responds to an invitation to a party with "Not on her life!" Brenda replies with, "No, I guessed not." She is resigned to putting up with her dull life, and seems, at first at the very least, quite self-sacrificial and to be a considerate wife. ...read more.

Simply the name is an ironic choice, as it doesn't suit his character. Beavers, by nature, are industrious and hard-working animals, and John Beaver is as far removed from his namesake as could be. Waugh shows that he has absolutely no prospects of employment. By portraying him in this way, Waugh depicts to the reader how desperate and lonely Brenda really is, as she will take up any company available. This is further expressed by how quickly she warms to Beaver. At the first hint of Beaver's arrival, Brenda suggests that "he can go into Galahad, no one who sleeps there ever comes again." However, she soon changes her mind, "Next time you come again you must have a better room ... I daresay you wont ever come again, people so seldom do." She is charmed, somehow, after spending only a day with him, and is eager to spend more time in his company. This further serves to highlight Tony's naivety and his misguided trust in his wife, which he does throughout the novel. Waugh also hints at Tony's naivety continuously throughout the novel. Tony states that Brenda was 'heroic with Beaver', to which she replies that she was 'coping' with it, and she enjoyed his company, hinting at their growing intimacy. ...read more.

Forster, conversely, uses rounded characters who mature and adapt as A room with a View unfolds. Whereas Waugh wants to show how he doesn't want culture and society, and even people to change, Forster has a more accepting view of this. A room with a view is also lacking in Waugh's cynical satire, taking a more romantic view on relationships. Lucy, the central character, eventually ends up with George, her true love, proving that love can overcome many obstacles. However, in a Handful of dust the protagonist is left in the Amazon jungle. It is apparent from the offset that Brenda and Tony's relationship is doomed in the novel 'A handful of Dust.' Waugh makes their differences clear throughout the novel, also making clear his distaste at the relationships within the English Upper-class. Brenda's further progression into a relationship with Jock Grant-Menzies, whilst Lucy remains with George, further emphasizes Waugh and Forster's different views, with Waugh's satirical sadness contrasting with Forster's acceptance and romanticism. Despite Lucy and Cecil's relationship being doomed, she did not act as unscrupulously with George as Brenda with Beaver, and this is the key point of comparison between the two novels. A Room with a View is a tale of love, hope and morality. A handful of Dust is an account of the author's sadness as the demise of conventions in adapting upper-class society. ...read more.