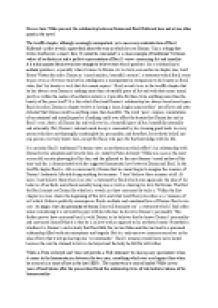 ﻿Discuss how Wilde presents the relationship between Dorian and Basil Hallward here and at one other point in the novel The twelfth chapter, although seemingly unimportant- yet a necessary reintroduction of Basil Hallward- in fact reveals a great deal about the way in which he sees Dorian. ?Sin is a thing that writes itself across a man?s face. It cannot be concealed? is a clear example of traditional Victorian values of aestheticism and a perfect representation of Basil?s views concerning Art and morality. It is at this moment Basil reveals how strongly he believes that ethical goodness has a relationship to aesthetic goodness, especially when it comes to Dorian. As we have seen earlier in chapter one, Lord Henry Wotton describes Dorian as ?some brainless, beautiful creature?, a statement which Basil seems to pass over as if it were true but his intelligence is unimportant in comparison to his beauty as Basil states that ?his beauty is such that Art cannot express?. ...read more.

?I don?t believe these rumours at all. At least, I cant believe them when I see you? a statement by Basil which once again aids the idea of his believes of aesthetic and ethical morality being one as well as showing his love for Dorian. That fact the Basil cannot see Dorian for what he is reveals just how consumed he truly is. Within the first chapter we were shown the beginning of this love and what Lord Henry describes as a ?romance of art? which I believe perfectly encompasses Basils aesthetic and emotional love of Dorian. Basil even says ?As long as I live, the personality of Dorian Gray will dominate me? a statement which I find rather ironic considering it is not until he pays with his life does he discover Dorian?s personality. This further proves how consumed basil is with Dorian, as he believes that he knows Dorian?s personality and convinced himself that it is that he is in love with as opposed to his aesthetic beauty. ...read more.

But know when they meet again Dorian is a new man still young but no longer naïve and has experienced the world. Dorian’s life has changed significantly in those eighteen years and he has become a new man, a man which Basil Hallward only recognizes from his untouched beauty and although seemingly similar with their aesthete views, they differ so much more ethically. Wilde has created a relationship between Dorian and Basil that has always been consistent from the first chapter and even in the twelfth chapter. Dorian is the dominant character of the two and will always have power over Basil because of his love of him, a love which Basil will die for. It is almost as if Basil has created Dorian in his mind as a man purely beautiful with nothing more and to realize that Dorian is more than this breaks his heart and ultimately leads to his demise. Gabriella Guy AO2: Demonstrate detailed critical understanding in analysing the ways in which structure, form and language shape meanings in literary texts AO4: Demonstrates understanding of the significance and influence of the contexts in which literary texts are written and received ...read more.