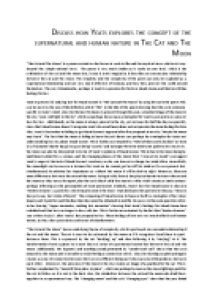 Discuss how Yeats uses the theme of the supernatural in &quot;The Cat and the Moon&quot;.

﻿Discuss how Yeats explores the concept of the supernatural and human nature in The Cat and The Moon ?The Cat and The Moon? is a poem centred on the forces at work in life and the mystical views which exist way beyond the simple rational views. The poem is very much similar as it works on one level, which is the celebration of the cat and the moon but, it also is semi- magical as it describes an unconscious relationship between the cat and the moon. The simplicity and the complexity of the poem can only be explained as a supernatural relationship and are very much reflective of humans; and how they perceive the world around themselves. The cat, Minnaloushe, perhaps is Yeats?s expression for his love Maud Gonne and that he still has feelings for her. Yeats expresses his undying love for Maud Gonne in ?The Cat and The Moon? by using her cat in the poem. This can be seen by the use of the definitive article ?The? in the title of the poem showing that the cat is someone specific in Yeats?s mind. Also, the theme of romance is present through the pure, untainted image of the moon in the sky; ?pure cold light in the sky? which can perhaps be seen a as a metaphor for Yeats?s pure and ever-present love for her. Additionally, as the moon is always present in the sky, yet not seen for half the day can possibly show that Maud Gonne doesn?t recognise Yeats?s love and hence does not reciprocate the same feelings for him. ...read more.

Also, the similarities between the cat and the moon also bind them together in a supernatural way. The ?changing moon? and the cat?s ?changing eyes? show that they are linked with each other; as one is altered the other alters itself accordingly in order to match. Also, this complex relation is confirmed by the statement, ?When two close kindred meet?. Yeats describing the two different entities as being somewhat related suggests that there is a mystical connection between them which is not visible to the reader but only to them. The use of the word ?When? suggests a time bound relation which emphasises the mystical nature of this relationship between the cat and the moon. Finally, as this phrase is followed ?What better than call a dance?? creates a jubilant atmosphere and reasserts the relationship between two very different things and perhaps reflects on the rarity of them meeting each other which accentuates the spirituality of this relationship. As Yeats was a strong believer of the supernatural, this theme is also present in ?The Stolen Child? where the supernatural beings, the faeries are seen to form a relationship with the child even though they are completely different to each other. This is seen by the phrase ?With a faery, hand in hand?. The physical connection in this poem is a step further than just the entrancement in ?The Cat and The Moon? hence, strengthening the mystical relationship between the faery and the human. ...read more.

Also, the balance is seen in ?The Fisherman?, as the fisherman is portrayed by Yeats to be in complete harmony with nature as he is ?simple? and ?wise?. However, Yeats?s poem, ?The Cold Heaven? disagrees with this and shows that life isn?t cyclical. This is seen as it portrays the definitive event of death and the afterlife, hence suggesting that there is no cycle and that there is a guaranteed end point. This is emphasised by ?Suddenly? as it shows that there is a clear break point in the cycle. Overall, the idea of balance and cyclicality in human nature and life suggests the involvement of something extraordinary, something that Yeats has yet to explore. This links into the theory of Plato?s Cave as it displays that one cannot understand what is present without going out to explore it. ?The Cat and The Moon? is definitely one of Yeats?s more complex poems with many underlying meanings. Yeats hints to the idea of human nature through love, lack of control and a balance in life. However, he underlays these themes with the idea of supernatural aid in order to achieve this and that there everything is destined and is inevitable. He hints to his belief in the theory of Plato?s Cave which shows that if you don?t go out and explore then you will never understand life. He also uses the belief of Taoism to accentuate the balance in life. ...read more.