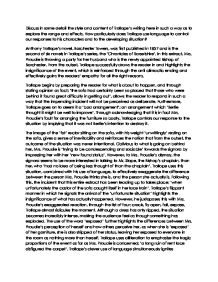 Discuss in some detail the style and content of Trollope(TM)s writing here in such a way as to explore the range and effects. How particularly does Trollope use language to control our responses to his characters and to the developi

Discuss in some detail the style and content of Trollope's writing here in such a way as to explore the range and effects. How particularly does Trollope use language to control our responses to his characters and to the developing situation? Anthony Trollope's novel, Barchester Towers, was first published in 1857 and is the second of six novels in Trollope's series, the "Chronicles of Barsetshire". In this extract, Mrs. Proudie is throwing a party for her husband who is the newly appointed Bishop of Barchester. From the outset, Trollope successfully draws the reader in and highlights the insignificance of the event, which is reinforced through the anti climactic ending and effectively gains the readers' empathy for all the right reasons. Trollope begins by preparing the reader for what is about to happen, and through stating opinion as fact; 'the sofa had certainly been so placed that those who were behind it found great difficulty in getting out', allows the reader to respond in such a way that the impending incident will not be perceived as deliberate. ...read more.

Although a dress has only ripped, the situation becomes incredibly intense, making the audience feel as though something has exploded. The use of the word 'exposed' further highlights the differences between Mrs. Proudie's perception of herself and how others perceive her, as when she is 'exposed' of her garniture, she is also stripped of her status, leaving her exposed to everyone in the room as nothing more than herself. Trollope uses alliteration to emphasise the tragic proportions of the event as far as Mrs. Proudie is concerned; 'a long ruin of rent lace disfigured the carpet'. Trollope's clever use of language simultaneously ignites sympathy within the reader for Mrs. Proudie and also highlights the bathos of the situation. Trollope uses exaggerated similes through implying Mrs. Proudie has taken a great deal of time and effort over her appearance; comparable to how long it takes to make granite batteries, which are 'the work of years'. This idea of 'dirt and dust and ugly fragments' both slows down the rhythm, bringing everything to a stand - still, and also places in our mind the metaphorical image of Mrs. ...read more.

and once again the reader feels sympathy towards him, as we are reminded that the outcome of the situation was not his fault and he should not be apologising. Trollope uses humour as a means of calming the storm through Bertie, who turns to the fat rector and comments 'after all it was your doing, sir - not mine. But perhaps you are waiting for preferment and so I bore it' after which there was a 'laugh against the fat rector' and 'thus things got themselves again into order'. This ending is somewhat anti climactic; the whole extract leads up to this 'explosion', allowing the reader to assume there would be total uproar following the incident, but it is instead resolved with a simple sentence from Bertie. Throughout, Trollope uses language, alliteration, metaphors, similes and imagery effectively in order to both draw the reader in and highlight that the 'incident' is not Bertie's fault. In addition, he emphasises the insignificance of the event in the grand scheme of things, and that all that was hurt was Mrs. Proudie's pride. ...read more.