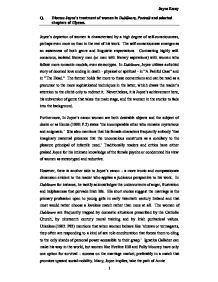 Discuss Joyce's treatment of women in Dubliners, Portrait and selected chapters of Ulysses.

Joyce Essay Q. Discuss Joyce's treatment of women in Dubliners, Portrait and selected chapters of Ulysses. Joyce's depiction of women is characterised by a high degree of self-consciousness, perhaps even more so than in the rest of his work. The self-consciousness emerges as an awareness of both genre and linguistic expectations. Contrasting highly self-conscious, isolated literary men (or men with literary aspirations) with women who follow more romantic models, even stereotypes. In Dubliners, Joyce utilizes a clich�d story of doomed love ending in death - physical or spiritual - in "A Painful Case" and in "The Dead." The former holds far more to these conventions and can be read as a precursor to the more sophisticated techniques in the latter, which draws the reader's attention to the clich� only to redirect it. Nevertheless, it is Joyce's achievement here, his subversion of genre that takes the main stage, and the women in the stories to fade into the background. Furthermore, In Joyce's canon women are both desirable objects and the subject of desire or as Henke (1990: P.2) states 'the incomparable other who remains mysterious and enigmatic.' She also mentions that his female characters frequently embody 'that imaginary maternal presence that the unconscious constructs as a corollary to the pleasure principal of infantile need.' Traditionally readers and critics have either praised Joyce for his intimate knowledge of the female psyche or condemned his view of women as stereotyped and reductive. However, there is another side to Joyce's canon - a more ironic and compassionate dimension evident to the reader who applies a judicious perspective to his work. In Dubliners for instance, he tacitly acknowledges the undercurrents of anger, frustration and helplessness that pervade Irish life. His short stories suggest the marriage is the primary profession open to young girls in early twentieth century Ireland and that most would rather choose a loveless match rather than none at all. ...read more.

Carnal lusts are condemned by the Church but, through figures such as the Virgin Mary, the Church creates feminine figures of sexual purity similar to the female objects of purity worshipped by Stephen. However, due to the teachings of the priests, Stephen feels condemned to a personal hell and expresses this through his relationships with women. As the narrator describes, 'He wanted to sin with another of his kind, to force another being to sin with him and to exult with her in sin' (P. 106). Because of the presence of other strong Catholic males within his life, including his father and especially the priests, Stephen rejects the idea that the Church is at fault in its teachings, instead opting for his own fault. This simply shifts the focus of the power structure so that Stephen views women as inferior for different reasons without realising that there remains a gender inequality. This dichotomy, Stephen's battle between lust and his interpretations of his own damnation, causes him to classify women as either deserving of damnation (prostitutes) or admired as objects of purity, the Madonna figures. Men are not interpreted in this manner. Harkness (1990: P.54) explains, 'women stand in shadows....separate from the work of the world, or from the world of the fiction itself.' Therefore the women in Portrait are marginalized and sidelined by their lack of strong presence in the text. In its criticism of the Catholic Church, the novel is also then a criticism of the traditional masculine values created by such an entity. The lack of female counterparts to the priests shows the way in which the modern Catholic Church disregards the necessity of women. Stephen succumbs to the cavalier attitude to bonds of emotion between men. As Harkness further states 'Stephen appears quick to identify with his father and his father's chums, not so his mother' (P.56). By rejecting his heritage in favour of Art, Stephen moves away from the religious value systems of masculinity advocated by his father. ...read more.

What men find deadly serious, she finds ridiculous. Where the men in the novel are detached from their emotions regarding them at a distance, Molly is gloriously in touch with hers. She is not fooled by Boylan. The view of the suspicious narrator of the "Cyclops" episode may echo male triumphalism: 'That's the bucko that'll organise her, take my tip' (347), but the reality is different. Molly's monologue shows that it is Molly who is using Boylan for her sexual gratification, which she is denied at home. She does not find him satisfying in any other way, however, and remarks upon his limitations and his gross familiarity, resenting the slap on the behind he gave her. Her affirmation at the end of the novel is for Bloom - although, as always, it is tempered by practicality: 'I saw he understood or felt what a woman is and I knew I could always get around him' (P. 389). Maddox also (1988: P.56) points to the fact that Molly is a woman who 'subverts male authority', however other critics are more sceptical. Thus we may well conclude that, although the roles and positions given to women by Joyce in Dubliners, Portrait and Ulysses seem subordinate, inferior, subsidiary and represent a highly patriarchal society, Joyce, as might be expected, remains contradictory and ambivalent in his treatment of women. Widely quoted is his remark Joyce Essay Imran Hussain to Mary Colum, stating that he hated intellectual women. Nora expressed to Samuel Beckett her exasperation with those who praised Joyce's' deep understanding of a woman's viewpoint, 'That man knows nothing about women' (quoted in Maddox P.278). Joyce talked of the "Penelope" episode as an addition, saying that the book proper ended with "Ithaca". He also, however, told Frank Budgen that Molly was the axis upon which the whole book revolved. Hence it is inappropriate in my opinion to take Joyce at face value and without a deep understanding of his intention in the novels. ...read more.