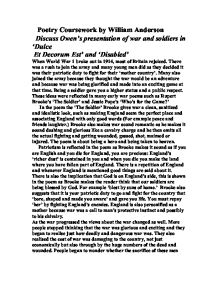 Poetry Coursework by William Anderson Discuss Owen's presentation of war and soldiers in 'Dulce Et Decorum Est' and 'Disabled' When World War 1 broke out in 1914, most of Britain rejoiced. There was a rush to join the army and many young men did as they decided it was their patriotic duty to fight for their 'mother country'. Many also joined the army because they thought the war would be an adventure and because war was being glorified and made into an exciting game at that time. Being a soldier gave you a higher status and a public respect. These ideas were reflected in many early war poems such as Rupert Brooke's 'The Soldier' and Jessie Pope's 'Who's for the Game?' In the poem the 'The Soldier' Brooke gives war a clean, sanitized and idealistic look, such as making England seem the perfect place and associating England with only good words (For example peace and friends laughter.) Brooke also makes war sound romantic as he makes it sound dashing and glorious like a cavalry charge and he then omits all the actual fighting and getting wounded, gassed, shot, maimed or injured. The poem is about being a hero and being taken to heaven. Patriotism is reflected in the poem as Brooke makes it sound as if you are English and you die for England, you are precious: England's 'richer dust' is contained in you and when you die you make the land where you have fallen part of England. ...read more.

Many had lost their boots but limped on, blood shod, all went lame; all blind; drunk with fatigue.') As you can see even from these couple of lines in the poem Owen uses physical description to help the reader visualise what is happening and what it was like to be out there. There is some very graphic imagery in the poem, (For example'Flound'ring like a man on fire or lime... Dim under a green sea I saw him drowning. In all my dreams, before my helpless sight, he plunges at me guttering, choking, and drowning'). Also in the poem there is some more graphic description about how what happened to this poor soldier after he got gassed: ('white eyes writhing in his face, his hanging face, like a devils sick of sin, at every jolt, the blood come gargling from the froth-corrupted lungs'). Owen also in the poem places the reader in the actual experience (For example 'If in some smothering dreams you too could pace behind the wagon we flung him in.') By recreating a specific moment in the poem, the gas attack Owen lets the reader "enter" and be part of the poem. Owen does not just place the reader in the experience he also directly addresses the reader by using words like "my friends" and "you" in the poem (For example 'If you could hear.... ...read more.

(for example 'All of them touch him like some queer disease') Owen focuses on one normal young man but this man represents millions of others like him and it showed the reader that their brother, husband, father could be facing or could be soon facing the consequences of fighting for your country like this young man did. It also lets the reader understand the perils of war on a personal level. In the poem there is a question being asked to the reader although not directly, and the question asked is whether the sacrifice of millions of young men's futures, lives, hopes and dreams was worth the countries involvement in the war, and again as in Dulce et... Owens answer is no, that it is not right to throw your future away for the country or for your country to expect this from you. The poem therefore shares some of Dulce et... bitterness and anger at the war. I can admire aspects of Brooke's poem after reading Owens as Brooke was an idealistic even romantic man and he was obsessed with war and also Brooke was a patriot and I admire him as he was not hesitant to sign for the army and these character points are reflected in his poem. Brooke was however na�ve and inexperienced so he really didn't know fully about war and this too is reflected in his poem. ...read more.