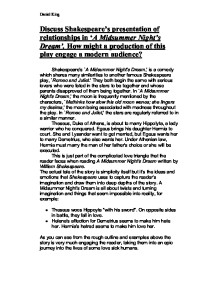 Discuss Shakespeare's presentation of relationships in 'A Midsummer Night's Dream'. How might a production of this play engage a modern audience?

Discuss Shakespeare's presentation of relationships in 'A Midsummer Night's Dream'. How might a production of this play engage a modern audience? Shakespeare's `A Midsummer Night's Dream,' is a comedy which shares many similarities to another famous Shakespeare play, `Romeo and Juliet.' They both begin the same with serious lovers who were fated in the stars to be together and whose parents disapproved of them being together. In `A Midsummer Night's Dream,' the moon is frequently mentioned by the characters, `Methinks how slow this old moon wanes; she lingers my desires,' the moon being associated with madness throughout the play. In `Romeo and Juliet,' the stars are regularly referred to in a similar manner. Theseus, Duke of Athens, is about to marry Hippolyta, a lady warrior who he conquered. ...read more.

* Helena's affection for Demetrius seems to make him hate her. Hermia's hatred seems to make him love her. As you can see from the rough outline and examples above the story is very much engaging the reader, taking them into an epic journey into the lives of some love sick humans. It's important to remember that this is not just a written story, it's also a scripted play but how might this epic play be staged to a modern day audience. People could get away with things on stage that seems crazy today. You have to bare in mind that modern theatre and audience expectations are very different to the expectations of Shakespeare's time. The theatre was very different in itself. ...read more.

Other details such as stage directions also affect the audience expectations of today. A modern play brings much more detail compared to Shakespeare's stage directions. Due to the lack of stage directions telling people today exactly how Shakespeare imagined his play, modern play writers must think up their own interpretations of the play. This can be done through their own choice of actors, lighting, music, effects and direction. As a result the lack of detail can fade and unexpected interpretations can be made. To round this essay up I would say that this play is a play that has been interpreted in many different ways during the years. The play that you see today may not be how it was done years ago; this is what makes A Midsummer Night's Dream such an engaging play. Daniel King ...read more.