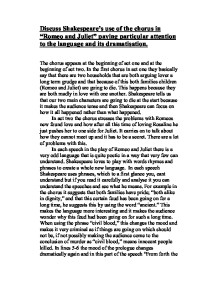 Discuss Shakespeare's use of the chorus in Romeo and Juliet paying particular attention to the language and its dramatisation.

Discuss Shakespeare's use of the chorus in "Romeo and Juliet" paying particular attention to the language and its dramatisation. The chorus appears at the beginning of act one and at the beginning of act two. In the first chorus in act one they basically say that there are two households that are both arguing lover a long term grudge and that because of this both families children (Romeo and Juliet) are going to die. This happens because they are both madly in love with one another. Shakespeare tells us that our two main characters are going to die at the start because it makes the audience tense and then Shakespeare can focus on how it all happened rather than what happened. In act two the chorus stresses the problems with Romeos new found love and how after all this time of loving Rosaline he just pushes her to one side for Juliet. It carries on to talk about how they cannot meet up and it has to be a secret. There are a lot of problems with this. In each speech in the play of Romeo and Juliet there is a very odd language that is quite poetic in a way that very few can understand. ...read more.

Juliet would now win over Rosaline. This certain phrase also created an atmosphere of great love but also rejection on Rosaline's half. Romeo says in one part of the play that Rosaline was the most beautiful woman ever and no-one could ever be better; "one fairer than my love! The all seeing sun ne'er saw her match since first the world begun." This makes you think does he really love Juliet as a moment ago he loved Rosaline for her looks but, know he seems to love Juliet for her looks. This is shown by the phrase "Alike bewitched by the charm of looks;" which means they both like each other for their looks therefore they don't know who they are or their personality. This creates a fearful atmosphere, as the audience know one is a Montague and one a Capulet and so this would not work, so we then feel scared for them. In this play Shakespeare uses great phrases to reflect the way in which people feel. One example of this is how Juliet feels about Romeo. She thinks she has him wrapped around her little finger, she can let him go so far than pull him right back in. "And she steals loves sweet bait from fearful hooks." ...read more.

Many modern productions find different ways of performing the prologue than a person entering the stage and projecting a speech. Nowadays modern technology allows for some special effects but still it is important to have a prologue as it sets the scene. Instead of a speech the prologue could also be acted out as a kind of credit before the play started. Film has its advantages over the prologue as it can act it out in many different ways and change a lot of the play around just as it did in Luhmanns film. They can put the film into a modern day era so as the audience can relate to things and find the film easier to understand. In Luhrmanns film there is a cross over period where Romeo and Juliet both realise what has happened but in the play this does not happen, this makes it more dramatic and therefore is a good idea. If there was no prologue the story may be a bit confusing as the plot thickens the audience would be baffled as to what's going on. The ending would not be as effective as the audience wouldn't know they were going to die so it would be a shock, and they then would not realise how cleverly produced the play was to come to this conclusion in such an exciting and eventful way. By Claire Brocklesby ...read more.