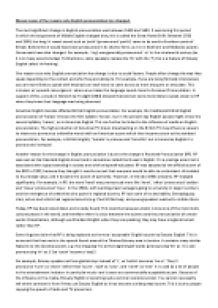 Discuss some of the reasons why English pronunciation has changed

﻿Discuss some of the reasons why English pronunciation has changed. The most significant change in English pronunciation was between 1400 and 1600. It was during this period in which the long vowels of Middle English changed a lot; this is called the Great Vowel Shift. Between 1700 and 1900, the long ?a? vowel sound such as ?path? (pronounced ?parth?) came to be used to Southern parts of Britain. Before this it would have been pronounced in its shorter form, as it is in Northern and Midlands accents. Consonants have also changed. For example, ?-ing? was generally pronounced ?-in? in the nineteenth century (as it is in many accents today). Furthermore, some speakers replace the ?th? with the ?f?; this is a feature of Estuary English called ?th-fronting?. ...read more.

This can further be linked to the influence of media on English pronunciation. The high production of American TV shows broadcasting on the British TV may influence viewers to viewers to pronounce unfamiliar words with an American accent which then becomes seen as the standard pronunciation. For example, in British English; ?tomato? is pronounced ?tomahto? but in American English it is pronounced ?tomayto?. Another reason for the change in English pronunciation is due to the change in Received Pronunciation (RP). RP was seen as the Standard English Accent and is sometimes called the Queen?s English. It?s a prestige accent ad is associated with a good standing in society and with being well-educated. RP was adopted as the official accent of the BBC in 1992, because they thought it was the accent that everyone would be able to understand- this added to its prestige value, and it became the accent of authority. ...read more.

This is an accent that has roots in the speech found around the Thames Estuary area in London. It contains many similar features to the Cockney accent, e.g. the dropping ?h?s at the beginning of words (pronouncing ?hit? as ?it?), and pronouncing ?th? as ?f? (so ?tooth? becomes ?toof?). For example, Estuary speakers will use glottal stop instead of ?t?, so ?bottle? becomes ?bo-ul?. They?ll pronounce ?tune? as ?choon? rather than ?tyune?, ?wall? as ?waw?, and ?north? as ?norf?. It is used by a lot of people in the entertainment industry- in particular music- and is seen as a commercially acceptable accent. Because of the influence in the media, Estuary English is becoming quite common outside London. You cannot necessarily tell where someone?s from if they use Estuary English as it has become a widespread accent. This is due to people copying the speech of radio and TV presenters. ...read more.