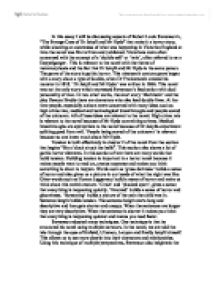 Discuss the aspects of Robert Louis Stevenson's novel that make it a horror story showing awareness of particular social, historical and cultural influences

In this essay I will be discussing aspects of Robert Louis Stevenson's, "The Strange Case of Dr Jekyll and Mr Hyde" that make it a horror story, whilst showing an awareness of what was happening in Victorian England at time the novel was first written and published. Victorians were often concerned with the concept of a 'double self' or 'twin', often referred to as a Doppelganger. This is relevant to the novel with the theme of metamorphosis and the fact that Dr Jekyll and Mr Hyde is the same person. The genre of the story is gothic horror. This nineteenth century genre began with a story about a type of double, when Dr Frankenstein created his monster in 1818. 'Dr Jekyll and Mr Hyde' was written in 1866. This novel was not the only story which expressed Stevenson's fascination with dual personality of man. In two other works, the short story 'Markheim' and the play Deacon Brodie there are characters who also lead double lives. At the time people, especially authors were concerned with many ideas such as high crime rate, medical and technological breakthroughs and people scared of the unknown. All of these ideas are relevant to the novel. High crime rate is relevant to the novel because of Mr Hyde committing crimes. ...read more.

In the section of the 'Carew Murder Case' Hyde is described with animalistic imagery. Although the elderly man seemed to address Hyde with perfect politeness, Hyde, without replying, suddenly flew into a wild rage and began to batter the helpless man. Animalistic imagery is clearly represented by Hyde here. His fury is described as 'ape-like'. He is also described as 'trampling his victim under foot', the word trampling makes the sentence as if an animal was doing it.Yet if Hyde were just an animal, and we would not expect him to take such delight in crime. Indeed, he seems to commit violent acts against innocent people for no reason except the joy of it, something that no animal would do. He appears deliberately and happily immoral rather than amoral, he knows the moral law and basks in his breach of it. The Metamorphosis between Jekyll and Hyde is another key feature of the novel. The metamorphosis is happening in the first place because of Dr Jekyll's Experiment. Dr Jekyll is trying to get rid of all evil, by splitting good from evil. We are given clues to suggest that they are the same person, such as the fact that Dr Jekyll and Mr Hyde have never met each other and are never both in the same room but Dr Jekyll still lets Mr Hyde in his house and gave him a key. ...read more.

'Dr Jekyll and Mr Hyde' was written as a mystery story but is a problem for the modern reader. That is today, most people already know that Jekyll and Hyde are the same person before beginning to reading the novel. This reduces the enjoyment for the modern reader. The Victorian may or may not have realized that they were the same person but it is not until the penultimate chapter, 'Dr Lanyon's Narrative', that Jekyll's terrible secret is revealed. Up to that point, we were given fascinating glimpse of Hyde though the eyes of other characters and, as well as drawing us into the mystery of the story, these also tell us important things about the characters themselves. Until the last two chapters, it could be said that 'Dr Jekyll and Mr Hyde' is a gripping mystery story. I think the novel is very effective as a horror story as it creates drama and the settings of the story are that of gothic horror. The novel was scarier in the 19th century than it is now. This is because the novel was published that time and the Victorians found it very scary and were concerned with the concept of 'double self'. Several symbols are used throughout the novel to explore the theme of the 'double self'. Overall tension, animalistic imagery, metamorphosis, symbolism and the mystery of the novel makes it's a great Gothic Novel. ...read more.