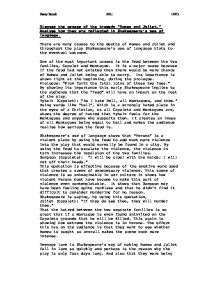 Discuss the causes of the tragedy

Discuss the causes of the tragedy "Romeo and Juliet." Analyse how they are reflected in Shakespeare's use of language. There are many causes to the deaths of Romeo and Juliet and throughout the play Shakespeare's use of language hints to the eventual outcome. One of the most important causes is the feud between the two families, Capulet and Montague. It is a major cause because if the feud had not existed then there would be more chance of Romeo and Juliet being able to marry. Its importance is shown right at the beginning, during the prologue. Prologue: "From forth the fatal loins of these two foes." By showing its importance this early Shakespeare implies to the audience that the "feud" will have an impact on the rest of the play. Tybalt (Capulet): "As I hate Hell, all Montagues, and thee." Using words like "hell", which is a strongly hated place in the eyes of a Christian, as all Capulets and Montagues are, shows the degree of hatred that Tybalt feels for the Montagues and anyone who supports them. ...read more.

And also that they were being reckless because they were young and never really stopped to think about what they were doing. Friar Lawrence: "Young men's love then lies Not truly in their hearts but in their eyes." This quotation is referring to the way that Romeo is so fixed upon one girl, Rosaline, and then suddenly is in love with Juliet and wants to marry her. It makes the audience contemplate whether Romeo and Juliet were ever truly in love and if Rosaline had ever shown an interest in Romeo would he have felt the same way about her as well. It is also showing the way that even characters, Friar Lawrence, doubted that is was true love. Paris: "Younger than she are happy mothers." I think that this quotation is Paris trying to be reassuring and persuasive about Juliet's age because he wants Capulet to trust him to marry his daughter. Shakespeare is showing again how vastly different their society and ours are. ...read more.

Fate is a deciding factor of events throughout the play. The characters in the play seem to be convinced in the phenomenon, which is fate, they appear to think that the course of fate cannot be changed. Romeo: " My mind misgives Some consequence, yet hanging in the stars." The language in this quote is very metaphorical, as consequence does not hang in the stars. It creates the image of fate falling out of the sky and would give the audience a feel of suspense. In conclusion I feel that although all of these causes are important to the outcome, teenage love is the one that affected it most. Romeo: "Did my heart love till now? Forswear it, sight. For I ne'er saw true beauty till this night." All thoughts of Rosaline have gone straight away as Romeo has seen "true beauty". This is said when Romeo has not even spoken to Juliet, yet he is talking of loving her already. I have come to the aforementioned conclusion because I think that if they had been older they would have thought more rationally about what they were doing and could have resolved things eventually. Katey Burak 10R1 10PD ...read more.