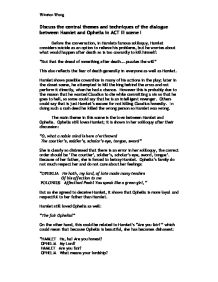 Discuss the central themes and techniques of the dialogue between Hamlet and Ophelia in ACT III scene I Before the conversation, in Hamlets famous soliloquy, Hamlet considers suicide as an option to relieve his problems, but he worries about what would happen after death so is too cowardly to kill himself: "But that the dread of something after death....puzzles the will" This also reflects the fear of death generally in everyone as well as Hamlet. Hamlet shows possible cowardice in many of his actions in the play; later in the closet scene, he attempted to kill the king behind the arras and not perform it directly, when he had a chance. However this is probably due to the reason that he wanted Claudius to die while committing a sin so that he goes to h**l, so some could say that he is an intelligent revenger. Others could say that is just Hamlet's excuse for not killing Claudius honestly. In doing such a rash deed he killed the wrong person so Hamlet was wrong. The main theme in this scene is the love between Hamlet and Ophelia. Ophelia still loves Hamlet; it is shown in her soliloquy after their discussion: "O, what a noble mind is here o'erthrown! ...read more.

The meaning of the word Nunnery is ambiguous, in the time of Shakespeare it is slang for brothel as well as meaning a convent. Hamlet means that if Ophelia Is good then she should go to a nunnery to protect herself from evil men: "We are arrant knaves all; believe none of us. Go thy ways to a nunnery" The other less evident reason is that if Ophelia is evil, she should go to a brothel: "Or, if thou wilt needs marry, marry a fool; for wise men know well enough what monsters you make out of them. To a nun- nery, go" After the marriage of Claudius and his mother, Hamlet is a misogynist, and he often generalises. Just because her mother is weak and evil for marrying his uncle, he believes that all women are similar. This is shown during the play within a play: "OPHELIA 'Tis brief, my lord. HAMLET As woman's love." He generalises that all women's love is short just because his mother re-married so quickly and Ophelia betrayed him. He is also to some extent, a misanthropist: "HAMLET Denmark's a prison. ROSENCRANTZ Then is the world one. ...read more.

There are also other ways of portraying this. In the film production directed by Zefirelli and starring Mel Gibson in 1990, a shadow was shown which led to Hamlet's discovery of the presence of the spies. In the film directed by and starring Laurence Olivier, Hamlet realises straight away that he is being spied on. Hamlet poses a threat to Claudius while talking about marriage: "Those that are married already, all but one, shall live;" In a film production directed by and starring by Kenneth Branagh in 1996, Hamlet creates a direct threat to Claudius by pointing to him through a see-through mirror. Hamlet wanted revenge on Claudius for the murder of his father, revenge is another matter in this play, there are some attempted revengers in this play but only one who is ultimately successful. There is Laertes who wants revenge on Hamlet for the killing of his father, Hamlet does die at the end but at the cost of Laertes' own life life, he realises at the end he is sorry for what he had done: "Exchange forgiveness with me, noble Hamlet." Hamlet wanting revenge on Claudius ends up losing his life as well. So the only successful surviving revenger is Fortinbras who gains revenge for the death of his father by taking over the kingdom of Denmark. Winston Wong ...read more.