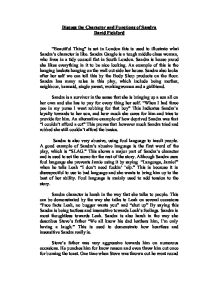 Discuss the Character and Functions of Sandra

Discuss the Character and Functions of Sandra David Pickford "Beautiful Thing" is set in London this is used to illustrate what Sandra's character is like. Sandra Gangle is a tough middle class woman, who lives in a tidy council flat in South London. Sandra is house proud she likes everything in it to be nice looking. An example of this is the hanging baskets hanging on the wall out side her house. Sandra also looks after her self we can tell this by the Body Shop products on the floor. Sandra has many roles in this play, which include being mother, neighbour, barmaid, single parent, workingwoman and a girlfriend. Sandra is a survivor in the sense that she is bringing up a son all on her own and she has to pay for every thing her self. "When I had three pee in my purse I went robbing for that boy" This Indicates Sandra's loyalty towards to her son, and how much she cares for him and tries to provide for him. An alternative example of how deprived Sandra was that "I couldn't afford a cot" This proves that however much Sandra tried and robbed she still couldn't afford the basics. ...read more.

Sandra is proving that she is significantly more than an average barmaid the proof of this was winning the award. Sandra is also very insecure. She was adopted when she was a child so she can't remember her real parents at all. She is not sure that she is a good parent, because she doesn't know how to bring up a child properly and not knowing her real parents she feels she can't ask for help and advice. As a result she occasionally makes mistakes and when she makes mistakes she feels very upset because she thinks that she has failed as a parent. "I never had a mum and dad so think your self lucky, sometimes I'm going to make mistakes." Another good point to Sandra is that she is tremendously proud and has a high opinion of her own abilities. This demonstrates that she has a tough character because she is prepared to boast to anyone about her abilities when she achieves something. Sandra is also confident in what she does. An example of Sandra's confidence is when she was talking about her time at school. She enjoyed sport at school and was good at it she said "I was a brilliant netball player when I was at school". ...read more.

Sandra represents a hard working class woman that is totally independent. That's had working in a sense that she is loving and honest even though she sometimes is sarcastic. She shows that you can still be successful even if you are disadvantaged because of Jamie being gay but and she thinks that young gay should be cared for and loved. She doesn't tell Jamie that she feels disadvantaged by him being gay because she doesn't want to hurt or upset him. Harvey uses Sandra to add dramatic tensions in the play. This is an alternative function demonstrated by the conflicts Sandra has with Jamie, Leah and Tony. Tension is used in the play to cause friction and to show the opinions of the different characters when arguing. From this we gain more knowledge about Sandra's character. This is that she sticks to what she believes in and isn't shy to stick up for what she believes in. Friction is important because it is one of the main functions of the play. In conclusion I think that Sandra is a fascinating person. She has lots of different effects on people this makes her an interesting character to study because she is a contradiction one hand she's tough but on the other hand she's tender. Another good example of this is that she is judgmental but she is also a tolerant person. Negative and positive qualities. ...read more.