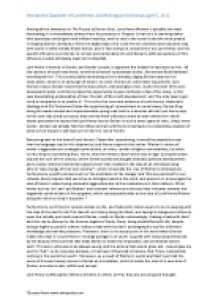 Discuss the Character Of Lord Henry And His Impact On Dorian Gray.

﻿Discuss the Character Of Lord Henry And His Impact On Dorian.April 5, 2012 Among all the characters in The Picture of Dorian Gray, Lord Henry Wotton is possibly the most fascinating; it is immediately evident from his presence in Chapter 1 that he is a charming talker who possesses enticing wit and brilliant intellect, and his role in the novel is also the most pivotal in shaping Dorian?s behaviour from the beginning to end. Lord Henry?s charisma and seductive way with words is what initially draws Dorian, and in fact everyone, towards him but Lord Henry uses his specific influence over Dorian to corrupt and demoralize him and Dorian?s wilful acceptance of this influence is what ultimately leads to his downfall. Lord Henry?s interest in Dorian, and Dorian?s youth, is apparent the instant he lays eyes on him: ?all the candour of youth was there, as well as all youth?s passionate purity?No wonder Basil Hallward worshipped him?. This is particularly interesting as he is already judging Dorian based on his looks alone, which is an early sign of what is to come. Moreover, when Basil requests for Lord Henry to leave, Dorian insists that he stays which, unknowingly to him, marks the start of his own downwards spiral. ...read more.

my soul for that!?, as he now also believes, or has been influenced to believe, that ?there is absolutely nothing in the world but youth?. Moreover, as a result of Wotton?s words and Basil?s portrait the sense of his own beauty comes to Dorian as a revelation, and this marks the start of a new side of Dorian, one who is vain, selfish and corrupt. Lord Henry?s philosophies follow a timeline in which, at first, they are amusing and thought-provoking but, nearer the end of the novel, they seem improbable and shallow. An example of this occurs in Chapter 19; he claims that ?the books that the world calls immoral are books that show the world its own shame?. However, the decadent book that Wotton lends Dorian in Chapter 10 actually facilitates Dorian?s real downfall, so it is difficult to accept what Lord Henry says as true. This particular ?yellow book? poisons Dorian, and Lord Henry was fully aware of the influence the book would have on him when he sent it as a gift; when Dorian meets Henry later that evening and expresses his fascination of the book, he replies with ?Yes: I thought you would like it?, which suggests that Henry is only interested in how far he can stretch his influence on Dorian, and doesn?t really care about the emotional impact it has on Dorian at all. ...read more.

philosophies are entirely egocentric and immoral, while his own life remains boringly sedate, which is picked up by Basil in the first few chapters of the book: ?You never say a moral thing, and you never do a wrong thing.? However, his own reserved nature does not stop him from promoting his selfish ideals in others and as he conveys to Gray his world view, Dorian becomes corrupted as he attempts to emulate him. Lord Henry Wotton is seen as a ?critique of Victorian culture at the end of the century, promoting a view of indulgent Hedonism?4; he is in fact, as stated by Oscar Wilde in one of his letters, ?what the world thinks me?. Wilde painted a lot of himself into Henry, and the author himself is hidden behind this entertaining ?Prince Paradox?, the nickname given to him by Dorian. Without Lord Henry, The Picture of Dorian Gray loses much of its appeal; he is the Devil on Dorian?s shoulder, the bug in his ear and ultimately, the influence Gray wishes he never had. However, what was initially fascinating about Henry eventually becomes ignorant. His intellect become presumptuous and blinds him to the disappointing reality of his own life and the ugly effects his influence has had upon Dorian Gray. . 4Quoted from www.wikipedia.com ...read more.