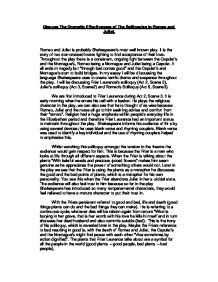 Discuss The Dramatic Effectiveness of The Soliloquies in Romeo and Juliet.

Discuss The Dramatic Effectiveness of The Soliloquies in Romeo and Juliet. Romeo and Juliet is probably Shakespeare's most well known play. It is the story of two star-crossed lovers fighting to find acceptance of their love. Throughout the play there is a consistent, ongoing fight between the Capulet's and the Montague's, Romeo being a Montague and Juliet being a Capulet. It all ends in tragedy but "through bad comes good" and the Capulet's and Montague's start to build bridges. In my essay I will be discussing the language Shakespeare uses to create terrific drama and suspense throughout the play. I will be discussing Friar Laurence's soliloquy (Act 2, Scene 3), Juliet's soliloquy (Act 3, Scene2) and Romeo's Soliloquy (Act 5, Scene3). We are first introduced to Friar Laurence during Act 2, Scene 3. It is early morning when he enters his cell with a basket. He plays the religious character in the play, we can also see that he is thought of as wise because Romeo, Juliet and the nurse all go to him seeking advise and comfort from their "terrors". Religion had a huge emphasis within people's everyday life in the Elizabethan period and therefore Friar Laurence had an important status to maintain throughout the play. Shakespeare informs his audience of this by using several devices; he uses blank verse and rhyming couplets. ...read more.

In her soliloquy it is not only her excitement that is described but her apprehension is shown as well "hood my unmanned blood bating in my cheeks" this line shows that she will be blushing (nervous). The show of both excitement and apprehension shows that Juliet is naive which causes a form of sympathy towards her within the audience. In her Soliloquy it shows her character clearly, we see her as a very sweet, na�ve girl and is desperately in love with her new husband. This strengthens the way that the audience feels towards her. They will also be begging fate to change so that Romeo and Juliet's lives will be spared. Shakespeare tries to put emphasis on the love Romeo and Juliet share using imagery. Juliet describes Romeo as "whiter than the snow on a ravens back", by using imagery they can relate to what the see in their minds. This image symbolises Juliet's unconditional love for Romeo." Shakespeare is trying to tell the audience that bad can come good and good can come from bad, he suggests that good can create evil when not used appropriately. Without the audience realising it, Shakespeare is giving them an insight into what will happen later in the play. The Friars soliloquy was a metaphor that Shakespeare created. ...read more.

The purpose of this soliloquy was to bring the play to a dramatic climax. The soliloquy gives us an insight into the emotions of Romeo and his true character. Shakespeare also uses dramatic irony at its most intense, and with the audiences knowledge of their deaths creates huge frustration. In conclusion we can see that each of the three soliloquies evokes three very different moods amongst the audience. The Friars speech is curious and conveys his wise and suspicious nature. It leaves the audience wondering what important role plants will have in the play, and how the cycle of good and bad will affect it. In contrast to this Juliet's soliloquy causes a more sympathetic reaction. The audience come to realise her sweet nature and feel pity towards her due to their knowledge that Romeo and she will end up dead. This comes to a climax in Romeo's soliloquy, where the audience know that Juliet is still alive, yet Romeo is about to take his life in front of them. In all three soliloquies this dramatis irony plays a huge role. It creates and intensifies the emotions of the audience. In the Friars they are left feeling curious, in Juliets they are left feeling pitiful and in Romeos deep desperation. Shakespeare wrote these soliloquies to cause a variety of reaction, and through language and dramatic irony he created one of the most famous captivating tragedies of all time. By Stephanie Moss ...read more.