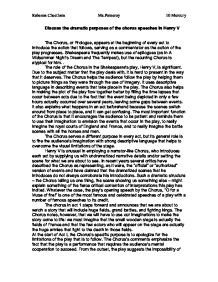 Discuss the dramatic purposes of the chorus speeches in Henry V

Discuss the dramatic purposes of the chorus speeches in Henry V The Chorus, or Prologue, appears at the beginning of every act to introduce the action that follows, serving as a commentator as the action of the play progresses. Shakespeare frequently makes use of epilogues (as in A Midsummer Night's Dream and The Tempest), but the recurring Chorus is atypical for him. . The role of the Chorus in the Shakespeare's play, Henry V, is significant. Due to the subject matter that the play deals with, it is hard to present in the way that it deserves. The Chorus helps the audience follow the play by helping them to picture things as they were through the use of imagery. It uses descriptive language in describing events that take place in the play. The Chorus also helps in making the plot of the play flow together better by filling the time lapses that occur between acts due to the fact that the event being depicted in only a few hours actually occurred over several years, leaving some gaps between events. It also explains what happens in an act beforehand because the scenes switch around from place to place, and it can get confusing. The most important function of the Chorus is that it encourages the audience to be patient and reminds them to use their imagination to envision the events that occur in the play, to really ...read more.

But even as he (on Shakespeare's stage, a single actor would have played the Chorus) apologizes for the fact that his stage cannot show the full reality of events, the Chorus uses striking language to help the audience picture that reality for themselves: "Think, when we talk of horses, that you see them, / Printing their proud hoofs i'th' receiving earth" (I.Prologue.26-27). In Act 2 the chorus introduces the second act, telling us that all of England is fired up and arming for the war, and King Henry is almost ready to invade France. The Chorus's introductory speech, which broadens the audience's perspective by presenting a big-picture view of the entire country in preparation for war, employs urgent and active language to heighten the sense that great deeds are afoot. A picture emerges of a country of heroes, ablaze with anticipation and activity: "Now all the youth of England are on fire, / ... / They sell the pasture now to buy the horse" (II.Prologue.1-5). Yet the individual soldiers-to-be that we encounter in Act II, scene i are much less awe-inspiring than those the Chorus describes. They speak in prose rather than verse, and they seem anything but heroic. The rhyming couplets with which Shakespeare ends important speeches are also absent in the speech of these commoners. ...read more.

The women and children of England are overjoyed to have their men returned to them, and everyone is also glad to see King Henry. When Henry returns to London, the people flock to see him and to celebrate. But Henry is humble and forbids a triumphal procession to celebrate his victory. Henry returns to France again, and the Chorus orders the audience to return its imagination to France, with the understanding that some time has passed. The Chorus appears for the last time to deliver the Epilogue. This very brief speech mentions the birth of Catherine and Henry's son, King Henry VI of England, who went on to lose France and bring England into war. With a final plea for the audience's tolerance of the play, the Chorus brings the play to a close. The Epilogue, like Pistol's news from home, strikes an unexpectedly somber note: it reminds us that Henry and Catherine's son did not, in fact, do what they had hoped by uniting the two kingdoms. Henry V, though the ideal king, was not influential in a historical sense-he looks to overturn history, but instead history overturns him. As always, the Chorus points out the difference between a play about a brief period in English history, within which Henry V is a highly successful protagonist of potentially dubious moral character, and the full scope of that history, a context within which Henry proved largely ineffective. ?? ?? ?? ?? Rebecca Cheetham Ms.Pomeroy 10 Mercury ...read more.