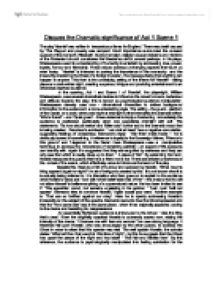 Discuss the Dramatic significance of Act 1 Scene 1 The play 'Hamlet' was written in tempestuous times for England. There was death caused by 'The Plague' and poverty was rampant. Much importance surrounded the outward support of the monarch, Elizabeth. During her reign, religion caused divisions and factions of the Protestant church considered the theatre as sinful, amoral perhaps. In his plays, Shakespeare uses his understanding of humanity to entertain by addressing love, power, loyalty, honour and friendship. These values address unchanging aspects that touch us even today. 'Hamlet' is intended to portray the importance of the monarchy and the insecurity created by the threat of a foreign invasion - the message being that anything can happen to anyone. This then is the underlying setting of the theme for 'Hamlet' - taking place on a dark winter night, creating suspense, intrigue and providing entertainment to an otherwise deprived audience. In the opening, Act 1 and Scene 1 of 'Hamlet', the playwright, William Shakespeare, uses several dramatical devices to influence the crowd's moods, behaviour and attitude towards the play; this is known as psychological audience manipulation. Shakespeare cleverly uses one - dimensional characters to deliver background information to the audience in a more entertaining style. The setting - the guard - platform of the Castle, on a dark, wintry cold night at midnight further intensifies the dramatic effect. ...read more.

' Like the King that's dead'. Even the originally sceptical Horatio is outwardly scared now, raising the intensity of the drama. 'It harrows me with fear and wonder:' he uses strong language. It therefore fell upon Horatio, who was encouraged by the other guards, to address the Ghost in order to attest that this spectre was real. The well spoken Horatio, the scholar states:' What art thou that usurp'st this time of night' - by this he suggests that the Ghost has upset the peace of the night and has taken ' That fair and warlike form'. By this reference, the audience is psychologically manipulated into feeling admiration for the dead king. He further challenges: ' By heaven I charge thee, speak!' The scene continues and Horatio admits to believing because he has seen with the: 'True avouch of mine own eyes'. Horatio recalls the previous battle with Denmark and Norway: this is political propaganda, which is the strong theme for the play, providing essential background information. This also casts a positive reflection of the previous king: 'When he the ambitious Norway combated' - this already gives the audience a positive reflection on the deceased King, as we are told of his bravery, 'He smote the sledded Polacks on the ice.' It also suggests that the king may have some unfinished business and that is why he has returned as the Ghost three times. ...read more.

This automatically gives the audience someone to support and "root for" in 'Young Hamlet' as the play unfolds and we learn more of his personal story. This is linked to another theme that the audience can identify with: family values. The element of mystery and foreboding are inherently present in Act One, Scene One and is further personified in the form of an apparition, 'This apparition come.' The contemporary audience that this was aimed at, being more religiously aware than the public nowadays, would have been fearful of the spectre and would have made links to the devil and h**l, gaining the audience's full attention. By the spreading of its arms, it has connotations to Jesus Christ, creating a sombre aura. They are encouraged to believe that the Ghost is an omen: ' That this portentous figure', is a sign that they are ready for battle. Essentially, the mood further reflects insecurity as Denmark may be on the verge of war. A clever technique Shakespeare uses serves to encourage loyalty to the monarch at the time, 'Long live the King'. Therefore, he has put his political views forward successfully and with discretion. The Ghost exits, leaving everyone none the wiser as to the reason for its apparition. The first Act and Scene allows for speculation and would have created a sense of dramatic anticipation, keeping the audience on the edge of their seats, ready to see what will ensue in the next scene. ...read more.

This is a very good essay and shows a very good understanding of 'Hamlet'. The writing successfully addresses language, structure and form and supports all the points made with direct references from the text.
To further improve the points being made about the opening could have been linked to other points in the play.