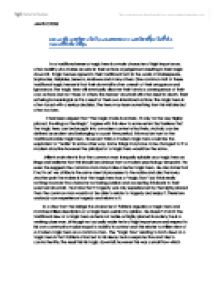 Discuss the extent to which you feel Eddie is a suitable tragic hero in A View From the bridge In a traditional sense a tragic hero is a male character of high importance, often nobility who makes an error in their actions or judgement resulting in their tragic downfall. Tragic heroes appear in their traditional form in the works of Shakespeare, Sophocles, Euripides, Seneca, Marlowe and many others. One common trait of these traditional tragic heroes is that their downfall is often a result of their arrogance and ignorance. The tragic hero will eventually discover their fate is a consequence of their own actions and not those of others. The heroes' downfall will often result in death. Their suffering is meaningful as it is a result of their own intentional actions. The tragic hero is often faced with a serious decision. The hero may learn something from his mistake but often too late. ...read more.

He doesn't match the traditional view of a tragic hero as he is not noble or highly placed in society; he is a working class man. Although not actually noble he is of high importance and respect in his own community maybe equal to nobility in context and this relates to millers view of a modern tragic hero as a common man. The "tragic flaw" relating to both views of a tragic hero is that Eddie is attracted to his niece; he is overprotective and tries to control her life. The result his his tragic downfall; however this was a small flaw which could have been overcome. However because of his arrogance and ego he wouldn't give in to what was happening instead aggressively opposing it. This relates well to both views of a tragic hero with miller describing the hero's tragic flaws as small and the traditional view that the heroes arrogance and ignorance results in their downfall. ...read more.

Alfieri seems to have a good understanding of Eddie his motives and his fate "I could see everything coming, step by step". Similar to the Greek chorus sometimes he could be said to express the characters secrets. Therefore Alfieri does play a similar role to the chorus in Greek tragedy. Eddies tragic flaw is his inappropriate l**t for his Niece Catherine which results in a series of events and eventually his death. Honor seems to be important to Eddie as at first he will not call the immigration bureau because he refuses to betray the immigrants. However when he sees Rudolph making love to Catherine his emotion s must overcome his importance of honor and he calls them. Also Eddies fight with Marco could be said to be because of honor and Eddies will to keep his honor, this however results in his tragic death. In typical tragedies the tragic hero is fated and I think this is also true with this play, with eddies actions and emotions it is inevitable that he will be in conflict with people and will find himself in undesirable situations. ?? ?? ?? ?? JAMES CROSS ...read more.