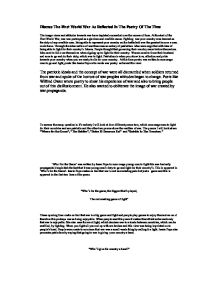 Discuss The First World War As Reflected In The Poetry Of The Time The image views and attitudes towards war have depleted somewhat over the course of time. At the start of the First World War, war was portrayed as a glorious and credible cause. Fighting war your country was deemed as the duty of any credible man. Being able to represent your country on the battlefield was the greatest honour a man could have. Through the intervention of war there was an outcry of patriotism. Men were engulfed with idea of being able to fight for their country's futures. People thought that governing their country came before themselves. Men used to fall over themselves when signing up to fight for their country. Women used to force their husband and sons to go and do their duty, which was to fight. Patriotism is when you show love, affection and pride towards your country when you are ready to die for your country. At this time poetry was written to encourage men to go and fight, poets like Jessie Pope who wrote war poetry enforced this view. The patriotic ideals and the concept of war were all dismantled when soldiers returned from war and spoke of the horrors of war peoples attitudes began to change. Poets like Wilfred Owen wrote poetry to show his experience of war and also to bring people out of this disillusionment. He also wanted to obliterate the image of war created by war propaganda. To answer the essay question in it's entirety I will look at four different poems two, which encourage men to fight for their countries and are patriotic and the other two poems show the realities of war. ...read more.

This is shown when he say's "A dust whom England bore, shaped, made aware." Rupert Brooke sees England as idyllic and tranquil and also he talks about his love for his motherland. Rupert Brooke feels by fighting for England he is giving something back. This is shown when he writes: "Gives somewhere back the thoughts by England given." Rupert Brooke feels proud by defending his country on the battlefield. I feel though it may convey fighting for your country as being your duty it is written from the heart and therefore can again have a widespread effect. The language is also quite simple so it can be read by the masses. The poet also goes on to describe dying in England as dying under an English heaven and this therefore describes England as being heavenly. "At hearts a peace, under an English heaven." This poem is very atmospheric and also very tranquil and therefore can have and prevalent effect on people. The poem is also very deep and deals with gratitude and patriotism. This poem would have probably effected many people has they would have felt as it was their responsibility to help England. England was portrayed in the poem as being perfect and therefore it was every mans duty to protect perfection thus protecting their country. As war progressed the feeling of patriotism demised and this happened as the death toll was escalating. People came out of this disillusionment that war is all things great and glorious and began to take in the realities of war it was harder to comprehend the ideals of patriotism and duty. ...read more.

This poem is also against mass propaganda as the poem involves a young boy who went to war and committed suicide through despair. He probably went to war due to the propaganda and ended up killing himself for this so called glorious and honourable cause. In conclusion this essay has enlighten me on many of the things which took place before and after the war. It has shown me how this exploitation of patriotism counted for so many people joining up to fight in the war. Being patriotic became 'cool' Which is wrong patriotism is a feeling you get from having love for your country not through seeing posters and reading poems about war. Feelings such as patriotism and duty were roused through mass propaganda. I also learned that people who haven't experienced war should not encourage men to join up e.g. Jessie Pope she shouldn't explain what she has not experienced. The feel of patriotism that was created was fickle because it was creates through media and lies and not through self believes. When men such as Wilfred Owen and Siegfried Sassoon came back and described their experiences of war this fickle feeling of patriotism was diminished for good. People were disillusioned through this propaganda. The propaganda was a necessity otherwise men would not have joined up for the war I personally feel that people should be told about the realities of war no matter whether they are horrid and vile if a person really is patriotic and loves their countries they will join up no matter what. ...read more.