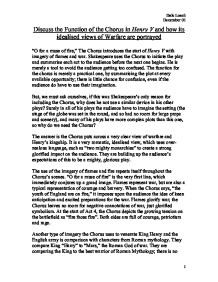 Discuss the Function of the Chorus in Henry V and how its idealised views of Warfare are portrayed "O for a muse of fire," The Chorus introduces the start of Henry V with imagery of flames and war. Shakespeare uses the Chorus to initiate the play and summarise each act to the audience before the next one begins. He is merely a tool to avoid the audience getting too confused. The function for the chorus is merely a practical one, by summarising the plot at every available opportunity; there is little chance for confusion, even if the audience do have to use their imagination. But, we must ask ourselves, if this was Shakespeare's only reason for including the Chorus, why does he not use a similar device in his other plays? Surely in all of his plays the audience have to imagine the setting (the stage of the globe was set in the round, and so had no room for large props and scenery), and many of his plays have more complex plots than this one, so why do we need the Chorus? The answer is the Chorus puts across a very clear view of warfare and Henry's kingship. It is a very romantic, idealised view, which uses over-zealous language, such as "two mighty monarchies" to create a strong glorified impact on the audience. ...read more.

This implies that the Chorus is used in the play to show the use of propaganda as a tool to increase moral. The Chorus are extremely biased toward the English, and their glorification of war is not only undermined in the instance mentioned above. After almost every Chorus speech, there is a scene that directly contradicts what they are saying. For example after the prologue, the audience witnesses a scene between Canterbury and Ely, who are planning on fooling "warlike Harry" into starting a war. They are abusing their position as ministers of God to avoid paying taxes. This also suggests that "Th' accomplishment of many years" is not all down to Henrys great kingship, were some of these accomplishments merely schemes fashioned by the church? This does not cohere with the Chorus's idea of "proud monarchies" and in fact shows a monarchy full of corruption and exploitation. Although Henry does manage to force Canterbury to accept all moral retribution if the war is against God's wishes, "The sin is upon my head", the church still succeed in manipulating him into declaring war on the French. The Chorus of Act 2 suggests that England is "a model to thy inward greatness" suggesting its internal strength is mighty and impenetrable and the population are content and are willing to follow the king to their deaths. ...read more.

is mended: That you have but slumbered here...Give your hands if we be friends" I believe Shakespeare was not idealising war in Henry V. The chorus's over-exaggerated views of perfect, heroic warfare often become ridiculous, for example, when the Chorus says the French "shake in their fear." Also the fact that Shakespeare undermines all of their main speeches with the structure of the play indicates that the Chorus's views are to be taken with a pinch of salt and are not really to be trusted. Certain productions of Henry V do glorify war, for example Laurence Olivier's production in the 1940's painted a beautiful, majestic picture of war, However after analysing the role of the Chorus in the play, I do not believe this play is a glorification of warfare. Henry's leadership is romanticised in the play considerably more than the idea of warfare. Productions such as Kenneth Brannagh's creation paint a far more realistic view of war, as a b****y, filthy affair. This is more what I feel the subtext of the play is. War is not really idealised in this play, it can be taken as being glorified, but because of Shakespeare's use of the structure of the play, and the Chorus's propaganda fabrications, the character of the Chorus does not in any way add to this glorification. Dale Loach December 01 1 ...read more.