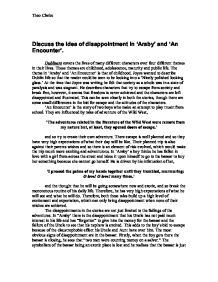 Discuss the idea of disappointment in 'Araby' and 'An Encounter'. Dubliners covers the lives of many different characters over four different themes in their lives. These themes are childhood, adolescence, maturity and public life. The theme in 'Araby' and 'An Encounter' is that of childhood. Joyce wanted to describe Dublin life so that the reader could be seen to be looking into a 'Nicely polished looking glass.' At the time that Joyce was writing he felt that society as a whole was in a state of paralysis and was stagnant. He describes characters that try to escape from society and break free, however, it seems that freedom is never achieved and the characters are left disappointed and frustrated. This can be seen clearly in both the stories, though there are some small differences in the bid for escape and the attitudes of the characters. 'An Encounter' is the story of two boys who make an attempt to play truant from school. ...read more.

Therefore, he has very high expectations of what he will see and what he will do. Therefore, both these tales build up a high level of excitement and expectation, which can only bring disappointment when none of their wishes are achieved. The disappointments in the stories are not just limited to the failings of the adventures. In "Araby' there is the disappointment that his Uncle has not paid much interest in his life and has "forgotten" to give him the money for the bazaar and the failure of the Uncle to see that his nephew is excited. This adds to the boy's bid to escape because of the claustrophobic effect his Uncle and Aunt have over him. The most obvious signs of disappointment are in the bazaar. Firstly, when the boy gets there the bazaar is closing, he sees that "two men were counting money on a salver." The symbolism of the bazaar being an exotic place is lost and he realises that the bazaar is just a market, where money is traded for 'wares'. ...read more.

He sees that they are schoolboys and treats them as such. This shatters the image of being mature and adventurous, and brings in a sense of claustrophobia because there is nothing these boys can do; they will always be treated as schoolboys. This is a huge disappointment for the narrator, especially as he tries to give the impression of being well read and highly intelligent, but the man seems to completely ignore the impression the narrator tried to give. In both 'Araby' and 'An Encounter' there are common themes of desire to escape, frustration of elders and the claustrophobic effect of the Dublin society. All these effects of the characters drive them to try to escape, but because they are tied down by these strong ties to the society and to Dublin itself, they always find disappointment in their futile attempts to escape. 'Araby' and 'An Encounter' epitomise the failure of the young to break the paralysis of their own society or to discover a way of escaping from that society, but certainly proves that escape is much harder than all the characters believe. ?? ?? ?? ?? Theo Clarke ...read more.