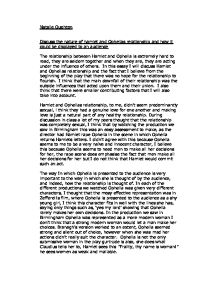 Discuss the nature of hamlet and Ophelias relationship and how it could be displayed to an audience.

Natalie Oughton Discuss the nature of hamlet and Ophelias relationship and how it could be displayed to an audience The relationship between Hamlet and Ophelia is extremely hard to read, they are seldom together and when they are, they are acting under the influence of others. In this essay I will discuss Hamlet and Ophelias relationship and the fact that I believe from the beginning of the play that there was no hope for the relationship to flourish. I think that the main downfall of their relationship was the outside influences that acted upon them and their union. I also think that there were smaller contributing factors that I will also take into account. Hamlet and Ophelias relationship, to me, didn't seem predominantly sexual, i think they had a genuine love for one another and making love is just a natural part of any healthy relationship. During discussion in class a lot of my peers thought that the relationship was completely sexual, I think that by watching the production we saw in Birmingham this was an easy assessment to make, as the director had Hamlet rape Ophelia in the scene in which Ophelia returns Hamlets letters. I didn't agree with this because Ophelia seems to me to be a very na�ve and innocent character, I believe this because Ophelia seems to need men to make all her decisions for her, the rape scene does emphasise the fact that men make all her decisions for her but I do not think that Hamlet would commit such an act. ...read more.

I think also part of hamlets newfound dislike for his mother has something to do with the eaidopus complex, I think this is intended as one of the themes running through the play is that of incest. Hamlet highlights his thoughts about womens attitudes to sex when talking to Ophelia during the play scene he says, 'did you think I meant country matters?' in branaghs version he speaks unnecessarily loudly to Ophelia trying to draw as much attention as possible to the two of them, Ophelia seems to be trying to shut Hamlet up but to no avail. Hamlet looks to be trying to draw attention to women in general. I think this partularly effective because it shows a lot of how hamlet is feeling about his mother and it begins to show the turmoil in Ophelia's mind. Ophelia's vulnerability and fact that she is easily influenced adds to the break down of their relationship, because she doesn't seem to be able to make decisions for herself, when her brother is leaving for paris he warns her that hamlet is too high above her birth to give her honorability, this is referring to the difference in status between hamlet and Ophelia, this is another reason why the relationship could never work, Hamlet is a prince and Ophelia is only the daughter of the kings advisor, this in itself could have been the downfall of the relationship because Ophelia and Hamlet could never have been married, Ophelia, being duty bound to her family agrees to obey what her brother tells her. ...read more.

Act III scene iv is significant to Hamlet and Ophelia's relationship because his attitude towards his mother is part of the breaking of their relationship, in Zeferellis version hamlet looks as if he is raping his mother, this again fits in with the theme of incest, he seems to be testing his mother, or even trying to prove her sin. When Ophelia is mad, a lot about her and Hamlets relationship comes to light. It is only when Ophelia is mad that she really talks and is noticed round the castle, I think the best interpretation of Ophelia's madness is in Zeferelis film, I find it the most touching way that she is presented to the audience and the way that she looks and acts makes a strong impact upon me. Ophelia says , 'you promised me to wed... if I had not come to thy bed' this shows that they have consummated their relationship, and also the way that Ophelia acts with the guard shows that she has sexual knowledge. Because Ophelia has been abandoned by all the men that she depends on in her life, she truly has been driven mad, not only this but also the fact that Hamlet has killed her father. In conclusion I think that the way that zepherelli portrayed the relationship was the most effective, as Hamlet and Ophelia's characters remained faithful the the Shakespearean text, and the time context working in the films favor. ...read more.