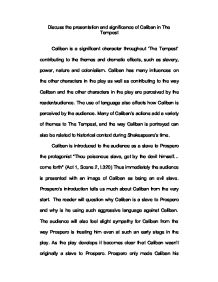 Discuss the presentation and significance of Caliban in 'The Tempest'

Discuss the presentation and significance of Caliban in The Tempest Caliban is a significant character throughout 'The Tempest' contributing to the themes and dramatic effects, such as slavery, power, nature and colonialism. Caliban has many influences on the other characters in the play as well as contributing to the way Caliban and the other characters in the play are perceived by the reader/audience. The use of language also affects how Caliban is perceived by the audience. Many of Caliban's actions add a variety of themes to The Tempest, and the way Caliban is portrayed can also be related to historical context during Shakespeare's time. Caliban is introduced to the audience as a slave to Prospero the protagonist "Thou poisonous slave, got by the devil himself... come forth" (Act 1, Scene 2, L320) Thus immediately the audience is presented with an image of Caliban as being an evil slave. Prospero's introduction tells us much about Caliban from the very start. The reader will question why Caliban is a slave to Prospero and why is he using such aggressive language against Caliban. The audience will also feel slight sympathy for Caliban from the way Prospero is treating him even at such an early stage in the play. As the play develops it becomes clear that Caliban wasn't originally a slave to Prospero. ...read more.

This shows that Caliban is naturally afraid of humans and pleads with them not to enslave him. "Do not torment me! O!" (Act 2, Scene 2, L56) This creates the image that Caliban is a feeble, weak and defenceless creature. Caliban repeats his plea several times to Stephano and Trinculo; so the use of repetition emphasises Caliban's weakness and natural servitude being. This will make the readers feel slight sympathy for Caliban. Prospero also contributes to the theme. Prospero often abuses Caliban with his power, if Caliban disobeys or annoys him. "Thou shalt be pinched as thick as honeycomb, each pinch more stinging than bees that made them" (Act 1, Scene 2, L328) The detail language Prospero uses to describe the punishment that Caliban will receive adds to his power status. The audience would relate Prospero similarly to a judge because of the detail he uses to describe Prospero's punishment. So why does Prospero use such negative language, and constant threats against Caliban? It can be seen that Prospero is the current Duke of the island, as he controls everyone on the island especially Caliban. However this is nothing in comparison to being the Duke of Milan. This could be the reason why Prospero contains so much anger against Caliban. ...read more.

The quote also has a disappointed and sympathetic tone to suggest that Prospero had hoped that Caliban wouldn't be so evil, and all his threats, domination and punishment would have benefited Caliban. This will question the audience's view on Caliban and consider if he is naturally evil. As it is being presented that Caliban is indeed evil. Caliban can be shown as being evil throughout much of the play. "Lo, lo, again! bite him to death, I prithee" (Act 3, Scene 2, L33) This will cause some of the audience to believe that Caliban is indeed evil. However the audience will relate to Caliban and assume that Caliban is simply retaliating against Trinculo. Caliban contributes to a number of themes throughout The Tempest and is one of the most active and mysterious characters throughout the play. Caliban has great effects and influences on many of the other characters this is emphasised by the use of imagery and metaphors conjured up by Caliban. The audience will have mixed feelings for Caliban as he has to put up with the ordeal of being threatened and punished by Prospero, however within a second will conjure up a plot to kill him. In my opinion I feel sympathy for Caliban because I think Prospero expresses too much illegitimate anger on Caliban. However many people will have different assumptions on Caliban presentation through The Tempest. ?? ?? ?? ?? ...read more.