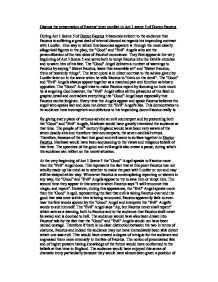 Discuss the presentation of Faustus' inner conflict in Act 1 scene 5 of Doctor Faustus.

Discuss the presentation of Faustus' inner conflict in Act 1 scene 5 of Doctor Faustus During Act 1 Scene 5 of Doctor Faustus it becomes evident to the audience that Faustus is suffering a great deal of internal discord as regards his impending contract with Lucifer. One way in which this becomes apparent is through the most clearly allegorical figures in the play, the "Good" and "Evil" Angels who are the personification of the two sides of Faustus' conscience. They first appear at the very beginning of Act 1 Scene 5 and serve both to tempt Faustus into the Devil's clutches and to warn him of his fate. The "Good" Angel delivers a number of warnings to Faustus by saying " Sweet Faustus, leave that execrable art" and "Sweet Faustus, think of heavenly things". The latter quote is in direct contrast to the advice given by Lucifer later on in the scene when he tells Faustus to "think on the devil". The "Good" and "Evil" Angels always appear together as a matched pair and function as binary opposites. The "Good" Angel tries to make Faustus repent by focusing on how much he is angering God however, the "Evil" Angel offers all the pleasures of the flesh in graphic detail and contradicts everything the "Good" Angel says especially that Faustus can be forgiven. ...read more.

appear to Faustus. This is one of the most crucial parts of the play because of the effect it would have had on the audience when the devils appeared. The major devils have a terrifying presence on stage because of the religious beliefs at that time, and the audience would have paid extra to see them. It would have also greatly affected the audience because they would be able to see that Faustus has gone so far into darkness that even Christ cannot save him. Therefore, if this scene were staged effectively, it would have been one of the most dramatic of the whole play. At the end of Act 1 Scene 5, Lucifer and Belzebub have terrified Faustus into submission and made him vow to think and speak only of "devilish" things. Faustus wavers between good and evil many times during Scene 5, but every time he does, he is tempted back by an evil force in the form of Mephastophilis, the "Evil" Angel or finally Lucifer and Belzebub. During this scene, Faustus seals his fate by signing a contract with Lucifer because he has ignored the warning signs given to him and has failed to think logically about the consequences of his actions. One of the reasons for this is because he has asked Mephastophilis many questions but did not stop to analyse his answers correctly. ...read more.

and "Hath Mephastophilis no greater skill". Faustus usually follows these questions with an optimistic answer such as "Thou art safe" which shows that he is almost trying to convince himself that he will come to no harm. Through these, the audience is able to see how disturbed his thoughts are and are almost able to see two sides to Faustus' conscience and how conflicting his thoughts are through his monologues. These monologues detail his thoughts and the emotional events that he experiences throughout the play and serve the purpose of depicting Faustus' anxiety, building tension and bringing the audience and protagonist closer together In conclusion we, as the audience, are clearly able to see that towards the beginning of Act 1 Scene 5, Faustus demonstrates his inner turmoil and uncertainty as to what is the right decision for him to make. His inner turmoil is presented primarily, through his monologues, which let the audience know what is happening in his mind, and the through the contrary manifestations of the "Good" and "Evil" Angels. The "Good" and "Evil" Angels symbolise the two extremes of his conscious thought and make it easier for the audience to see Faustus' confusion. By the end of the scene it is made clear that through the temptation of Mephastophilis, the terror of Lucifer and Belzebub and the lies of the "Evil" Angel, Faustus' soul will be contractually damned to h**l and he does not have a hope of salvation. ...read more.