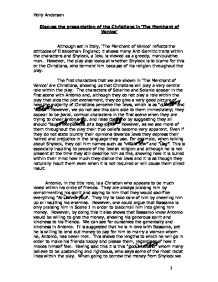 Discuss the presentation of the Christians in 'The Merchant of Venice'

Discuss the presentation of the Christians in 'The Merchant of Venice' Although set in Italy, 'The Merchant of Venice' reflects the attitudes of Elizabethan England; it shows many Anti-Semitic traits within the characters and Shylock, a Jew, is viewed as a greedy, manipulative man. However, the play also looks at whether Shylock is to blame for this or the Christians, who torment him because of his religion throughout the play. The first characters that we are shown in 'The Merchant of Venice' are Christians, showing us that Christians will play a very central role within the play. The characters of Solarino and Solanio appear in the first scene with Antonio and, although they do not play a role within the play that aids the plot evolvement, they do give a very good picture of how the majority of Christians perceive the Jews, which is as "currish" and "harsh". However, we do not see this dark side to them immediately; they appear to be jovial, comical characters in the first scene when they are trying to cheer Antonio up, and raise the tone by suggesting they all should "laugh like parrots at a bag-piper". ...read more.

He is described as being "loyal Bassanio" and although this shows us how positively his friends view him, we have to question it. He uses Antonio's love for him in order to get him to lend him money, which nearly results in the death of Antonio, and he uses this money to travel to marry Portia, showing that he does not care for Antonio's feelings. One could also say that he is wasteful with his money. He has parties and banquets when it is obvious he has no money as he has had to borrow some; it is only by marrying wealthy Portia that he comes by any. By doing this we question his love for her, whether it is genuine or it is her fortune that he is interested in. Having said this he does also have many good characteristics; he is one of the least anti-Semitic Christian characters and even invites Shylock to "dine with us", showing how he would happily sit and "be merry" with a Jew. However, Shylock refuses saying Gratiano is again a Christian who appears to be an objective, good-natured character. Many of the other Christian characters speak about him with praise and admiration. ...read more.

However, she feels the need to "become a Christian" in order to become "a loving wife". Another reason we see Lorenzo as being an honourable character is the trust the others put in him. Portia even trusts him with the "husbandry and manage" of her house while she is away. As she is a wealthy woman it would be wise to suggest that she would not trust someone foolish with her house and belongings, thus enforcing our opinion that Lorenzo is not a bad man. Although, having said this it is impossible to ignore the amount of importance he places on his father-in-law's wealth. He becomes especially pleased when he realises that Shylock's fortune is now his and Jessica's, something we would have thought wouldn't matter to someone who professes that he loves "her heartily". It is impossible to say whether Shylock is his own cause for misery, or whether it is caused by the Christians who surround and torment his life. However, it is easy to see that the Christians, as a whole, are very prejudiced towards those different from themselves. They are very 'two faced', showing lots of support for each other, but unlimited hatred towards the Jews they make use of. ?? ?? ?? ?? Holly Anderson 1 ...read more.