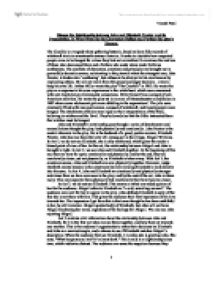 Discuss the Relationship between John and Elizabeth Proctor and its Presentation. In What Ways Do the Characters Reflect and Further the play's Themes.

Discuss the Relationship between John and Elizabeth Proctor and its Presentation. In What Ways Do the Characters Reflect and Further the play's Themes. The Crucible is a tragedy about gathering hysteria, based on bona fide records of witchcraft trials in seventeenth-century America. It seeks to elucidate how respected people came to be hanged for crimes they had not committed. It examines the motives of those who denounced them and of others who under stress made fictitious confessions. The conflicts of characters, emotions and principles are brought out in powerfully dramatic scenes, culminating in the pinnacle when the strongest man, John Proctor, is broken into 'confessing', but refuses to be disloyal to his own honour by implicating others. He will not move from this proud and angry decision - even to keep his own life. Arthur Miller wrote the play "The Crucible" in 1953. He wrote the play as a response to his own experiences in the witch-hunt, which were concerned with anti-Capitalist pro-Communist accusations. Miller himself was accused of anti-American activities. He wrote the play set in an area of Massachusetts called Salem in 1692 where some adolescent girls were dabbling in the supernatural. The jails were eventually filled with men and women, accused of witchcraft, and twenty people were hanged. The inhabitants of Salem were rigid in their interpretation of the Bible, believing in witches and the Devil. They believed also that the Bible instructed them that witches must be hanged. John and Elizabeth's relationship goes through a series of detachments and reconciliations thought the play, both physically and emotionally. John Proctor is the central character in the play. He is the husband of a good, puritan woman, Elizabeth Proctor. John has also been the lover of a young girl in the village, Abigail Williams. In Act 1, we do not see Elizabeth, she is only mentioned, which gives the reader a biased point of view of her. ...read more.

I Act 3, In order to save John's life Elizabeth tells a lie. Elizabeth is asked by Danforth, "Is your husband a lecher!" to which Elizabeth replies "No, sir." The playwright makes this incident dramatic because Elizabeth is not allowed to look or speak with John or Abigail. She must concentrate on Danforth. Tension is shown in the bodies and their positioning, and the audience already knows that John has confessed to lechery. For the audience, this creates one of the most dramatic scenes in the play. I think they will sympathise with Elizabeth for being put in the situation she was, her husband's life rested on the questions asked. By the end of the act, the audience see how powerful their love is; because Elizabeth lies for her husband and denies that, he is a lecher. This is a lie. However, it is only Hale who realises that she said what she did out of love, Judge Danforth will however, not believe this. In Act 4, John and Elizabeth are physically further apart more than they have ever been before. Elizabeth is pregnant and neither of them is allowed to see their children. John is being held prisoner, he has been accused of "trafficking" with the devil, and Elizabeth will not be hung until her child is born. This brings them closer emotionally. Reverend Hale wants John to confess to save his wife and child. He tells Elizabeth that her husband is due to hang the next morning, and tries to get her to make him confess. They meet, and at the beginning they are very formal, and it is not until further on in their conversation that their true feelings for each other become apparent to the audience. Elizabeth quietly says, "I have heard it." She has heard the news her husband is due to hang. This is a statement, and a monosyllabic one. ...read more.

This also gives the play a direct parallel to the McCarthy investigations, where anyone who opposed them was treated as enemies. Honesty and integrity are significant themes. The most admirable characters are in the play are those who keep their dignity and refuse to lie. Rebecca Nurse and Elizabeth are just some examples of this. John Proctor also comes to peace with himself as he takes the decision to die rather than lose his good name. This brings us back to the theme of the crucible, where he becomes "purified". Those who do not retain their dignity however, end up despondent, and mentally and morally scarred. Loyalty is another theme in The Crucible, and John and the loyalty towards his friends in Act 4 best demonstrates this theme. He could have retracted his accusations against Abigail when he learns Elizabeth is pregnant, but instead he continues to support his friends whose wives have too been accused of witchcraft. Another example of loyalty in the play is when Elizabeth, in the courtroom scene, denies that John is a lecher. This was the loyalty of a lover, except ironically her loyalty destroyed John's case against Abigail. Another theme in the play is courage. We see courage through the behaviour of those accused of witchcraft, for example Rebecca Nurse. As she goes to be hanged, she tells John to 'fear nothing'. John also tells Elizabeth to show no tears. We hear of Giles Corey defiance of the authority by refusing to plead guilty or not guilty to his charges, so that his sons will inherit his farm as opposed to the state. His last courageous words were "More weight". Envy is demonstrated in the Putnams' arguments over land, and Ann Putnam's harsh attitude towards Rebecca Nurse. These harsh feelings find their way to become accusations of witchcraft. Abigail is also envious of Elizabeth being John's wife, and is dependant on the fact that with Elizabeth removed, she can take her place. ?? ?? ?? ?? Vinesh Patel 1 ...read more.