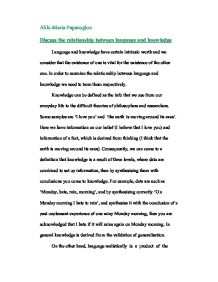 Discuss the relationship between language and knowledge.

Aliki-Maria Papazoglou Discuss the relationship between language and knowledge Language and knowledge have certain intrinsic worth and we consider that the existence of one is vital for the existence of the other one. In order to examine the relationship between language and knowledge we need to term them respectively. Knowledge can be defined as the info that we use from our everyday life to the difficult theories of philosophers and researchers. Some samples are 'I love you' and 'the earth is moving around its axes'. Here we have information on our belief (I believe that I love you) and information of a fact, which is derived from thinking (I think that the earth is moving around its axes). Consequently, we can come to a definition that knowledge is a result of three levels, where data are combined to set up information, then by synthesising them with conclusions you come to knowledge. For example, data are such as 'Monday, hate, rain, morning', and by synthesising correctly 'On Monday morning I hate to rain', ...read more.

What's more, the way we stand and hold ourselves may convey hesitancy, hostility, servility, good will, and so on. We call these forms of non-verbal communication body language. There are, as well, cases where we learn much from other people through their unconscious body language. Unintentional signs of our thoughts, attitudes and intentions may be detected by facial expression, eye contact, dilation of the pupils of the eye, sweating, and so forth. These signs may also differ from culture to culture, and because they are not under conscious control, they may be the cause of serious misunderstandings. An case is when a woman is flirting with a man using eye contact in France is natural but in India s unthinkable since woman's place in society differs. In addition, there are sign languages which are genuine non verbal languages used by the deaf which have vocabularies of thousands of words, and grammars as sophisticated and complex as any verbal language. ...read more.

For example when a bee pinches you, you instinctively say: 'I am in pain'. Clearly this does not apply and such points have seemed to many to undermine our traditional relationship between words and thoughts. A strong example of the inverse function of the relationship between words and thoughts is in George Orwell's writing '1984'. Through his book he revealed his fearful prediction of totalitarian governments that would fashion this power to influence language in their own interests as a tool of their despotism. He envisioned a new language called 'Newspeak', that constantly reduces the number of words from the English vocabulary, by erasing the synonyms of words, and in that way the citizens will consequently reduce their thoughts. Last of all, we conclude that language constitutes the optimal vehicle for enhancing knowledge while thought without knowledge is significant to life only with instincts. Language developed given that people wanted cognitive capability, which goes hand in hand with linguistic capability since language and knowledge developed inversely with mankind. --------------------- Length: 1022 words ...read more.