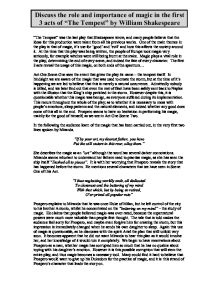 Discuss the role and importance of magic in the first 3 acts of &quot;The Tempest&quot; by William Shakespeare

Discuss the role and importance of magic in the first 3 acts of "The Tempest" by William Shakespeare "The Tempest" was the last play that Shakespeare wrote, and many people believe that the ideas for this production were taken from all his previous works. One of the main themes in the play is that of magic, it's use for 'good' and 'evil' and how this affects the society around it. At the time that the play was being written, the people of Europe took magic very seriously, for example witches were still being burnt at the stake. Magic plays a vital role in the play, determining the end of every scene, and indeed the fate of every character. The first 3 acts reveal the usage of this magic, on both ends of the spectrum... Act One Scene One sees the event that gives the play its name - the tempest itself. In hindsight we are aware of the magic that was used to create the storm, but at the time of it's happening we are led to believe that this is merely a natural occurrence. Admittedly nobody is killed, and we later find out that even the rest of fleet have been safely sent back to Naples with the illusion that the King's ship perished in the storm. ...read more.

Ariel is invisible as a product of her magic, playing a lute and sings to draw Ferdinand closer to Miranda. There is much debate about whether the following passage has been set up by Prospero and indeed manufactured it entirely to fit with his plan, or whether Shakespeare meant a romance to occur to lighten the mood of the play. Either way, it seems a little far-fetched that Ferdinand and Miranda appear to fall in love instantly, love at first sight, which would indicate that Prospero has had some intervention. The romance is also a key part of Prospero's plan, and we would assume that he would have had some involvement to make sure this all went smoothly. If this is the case, Prospero is again using his magic for his own personal gain - seeking revenge upon those who deposed him. Ferdinand starts to put up a fight with Prospero and "He draws and is charmed from moving". The stage directions indicate that Ferdinand is frozen to the spot to stop any harm from happening, but this is debatable as to whether it was actually necessary. ...read more.

Ariel is sent in as a harpy and the feast then vanishes, dashing all the hopes of the men in one fell swoop. The men are very confused by this occurrence. Ariel's long speech condemns the men and the spectacle of this mythical bird is done to scare the men. Prospero has set up everything for this moment, and carries it off in true style. Everything has been done to have the greatest effect, and whether this is truly humane is debateable. In all, the whole of the play depends entirely of magic, and if it were not for Prospero's interest in magic in the first place, none of this would have taken place. The supernatural powers that Prospero exerts and sometimes abuses are the very basis of the play, which is unusual for Shakespearean play. For example, in Macbeth the witches have some influence over Macbeth himself, but the power of free will can over-ride this, as it does on several occasions. The repeated use of magic can appear delightful if staged in the correct way, however if you read deeper into the play, it is apparent that Shakespeare wanted to represent the potential of supernatural powers if misused. The way he has done this works well to show the corruption of humans when they believe they are bigger than a magical, mysterious force. ...read more.