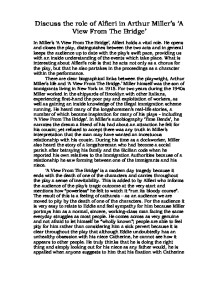 Discuss the role of Alfieri in Arthur Miller's 'A View From The Bridge' In Miller's 'A View From The Bridge', Alfieri holds a vital role. He opens and closes the play, distinguishes between the two acts and in general keeps the audience up to date with the play's swift pace, providing us with an inside understanding of the events which take place. What is interesting about Alfieri's role is that he acts not only as a chorus for the play, but that he also partakes in the proceedings as a character within the performance. There are clear biographical links between the playwright, Arthur Miller's life and 'A View From The Bridge.' Miller himself was the son of immigrants living in New York in 1915. For two years during the 1940s Miller worked in the shipyards of Brooklyn with other Italians, experiencing first-hand the poor pay and exploitation of workers, as well as gaining an inside knowledge of the illegal immigration scheme running. He heard many of the longshoremen's real-life stories, a number of which became inspiration for many of his plays - including 'A View From The Bridge'. In Miller's autobiography 'Time Bends', he narrates the dream a friend of his had about an attraction he felt for his cousin; yet refused to accept there was any truth in Miller's interpretation that the man may have wanted an incestuous relationship with his cousin. ...read more.

He knows what their values are and what is and is not tolerated. What separates him from the other Sicilians in Brooklyn is his knowledge of the American law system. With knowledge of both the different law systems, Alfieri has a great understanding of the situations and circumstances which arise in the area he lives. This image of Alfieri as an objective and intelligent, almost superior member of the community seems to refer to the play's title. It is possible to see the metaphor of the 'Bridge' as a direct reference to Alfieri who acts as an observer as both his character and in his role as the chorus, he watches the events unfold, knowing all along how it will end, yet he remains powerless to prevent any of it. This notion of Alfieri as omniscient ties in with the idea of being high up on the Brooklyn Bridge, looking down and observing all the proceedings yet being unable to act in any way to stop the tragedy which will result. The use of Alfieri within the play relates to the title metaphorically in other ways too. In addition to being all-knowing and wise, the connection between Alfieri as a lawyer of American Law and his awareness of the Sicilian code of honour could depict Alfieri as the bridge himself, a link between the Sicilian world of justice and honour and the American world of law and order. ...read more.

Alfieri subtly tries to warn Eddie that he does not "think" it would be a wise idea to do "anything" about it though. It is also within this monologue that Alfieri hints at the inevitability of the tragedy to come, that there is no "mystery" about it, it is bound to happen and he is helpless to "stop it". In conclusion, there is no doubt that Alfieri holds a vital role within the play. He is the key to maintaining the audience's understanding of the drama and ensuring that we are aware of the changing dynamics and situations which evolve throughout the performance. He helps to develop our awareness of what the effect of these events are. It is clear also that Miller has used Alfieri quite intentionally as a way through which to express some of his views, his main ambition being to prove to people that the death of a low-born character is equally as tragic as the death of a high-born one. He clearly accomplishes this in 'A View From The Bridge'. Alfieri is not only used to enhance the audience's understanding of the play but also to create a structure, distinguishing between the two acts. Effectively Alfieri is the view from the bridge; he sits and watches the events unfold, watching helplessly as Eddie walks closer and closer to the other side, knowing what the tragic outcome will be, yet remaining powerless to prevent it. ...read more.