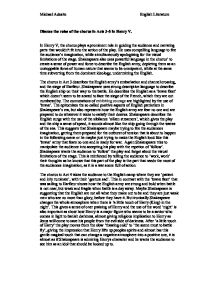 In Henry V, the chorus plays a prominent role in guiding the audience and narrating parts that wouldn't fit into the action of the play. He uses compelling language to fire the audience’s imagination, while simultaneously apologizing for the visual limitations of the stage. Shakespeare also uses powerful language in the chorus’ to create a sense of power and force to describe the English army, depicting them as an unstoppable force of human nature that seems to be omnipotent, while at the same time subverting from the dominant ideology, undermining the English.

The chorus in Act 3 describes the English army’s embarkation and channel crossing, and the siege of Harfleur. Shakespeare uses strong descriptive language to describe the English ship on their way to the battle. He describes the English as a ‘brave fleet’ which doesn’t seem to be scared to face the siege of the French, which they are out numbered by. The connotations of exhibiting courage are highlighted by the use of ‘brave’. The epitomizes the so called positive aspects of English patriotism in Shakespeare’s era, but also represents how the English army are fear no one and are prepared to do whatever it takes to satisfy their desires. Shakespeare describes the English surge with the use of the sibilance ‘silken streamers’, which gives the play and the ship a sense of speed, it sounds almost like the ship going through the waves of the sea. This suggests that Shakespeare maybe trying to fire the audiences imagination, getting them prepared for the outburst of tension that is about to happen in the following scene or he maybe just trying to make the English look like this ‘brave’ army that fears no one and is ready for war.  Again Shakespeare tries to manipulate the audience into accepting his play with the repetion of ‘follow’. Shakespeare wants the audience to ‘follow’ the play and forget about the visual limitations of the stage. This is reinforced by telling the audience to ‘work, work’ their thoughts as he knows that this part of the play is the part that needs the most of the audiences imagination, as it is a war scene full of action.

The chorus in Act 4 takes the audience to the English camp where they are ‘patient and inly ruminate’, with their ‘gesture sad’. This in contrast with the ‘brave fleet’ that was sailing to Harfleur shows how the English army are strong and bold when battle is not near, but weak and fragile when battle is a day away. Maybe Shakespeare is suggesting that the English are not all what they make out to be and they are just weak men who see no more than glory, before they have it. But ironically Shakespeare changes the whole atmosphere when there is ‘a little touch of Harry (King) in the night’. This gives a sense of over praising of Henry and the use of the word ‘night’ is also important as show how Henry is a major figure who seems to be a savior who comes in light to banish darkness, almost giving religious implication to Henry as Jesus will come to save his people from the evil side of darkness. After ‘a little touch of Harry’ the play moves from the slow ‘thawing cold’ to ‘the scene must to battle fly’, giving the impression that Henry lifts up peoples spirits and almost has this gentle magical touch that can change a negative atmosphere into a positive one, it is almost as if Shakespeare is admiring Henrys character and he wants the audience to see him as an idol that should be looked up to.

The chorus in Act 5 brings the audience to the aftermath of the war. The English have obviously won the war and Henry is seen as a savior who won the war for the English. He is describes as having a ‘bruised helmet’ and a ‘bended sword’ showing how he put his life on the line as a king to win the war for England. The words ‘bruised’ and ‘bended’ connotates the fierce bravery of Henry, which seems to have been hidden before the war and that the audience should praise him for his bravery, although he ‘forbids’ it. Shakespeare uses this as an opportunity to show the audience that Henry is not just this man who sets his people free from evil, but as a man who will stand by his country no matter what.

Ultimately, the three chorus show the audience how Henry is a savior that changes light into darkness, which I feel shows how Shakespeare feels about what a Christian king should look like. Although a lot of powerful and descriptive language is used by Shakespeare to describe Henry, I think he is undermining Henry in a subversive way and maybe attacking the monarch of his time and saying what a king is meant to do. The End.