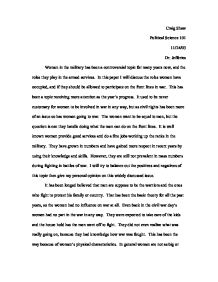 Discuss the roles women have occupied within the military, and if they should be allowed to participate on the front lines in war.

Craig Shaw Political Science 101 11/24/03 Dr. Jefferies Women in the military has been a controversial topic for many years now, and the roles they play in the armed services. In this paper I will discuss the roles women have occupied, and if they should be allowed to participate on the front lines in war. This has been a topic receiving more attention as the year's progress. It used to be never customary for women to be involved in war in any way, but as civil rights has been more of an issue so has women going to war. The women want to be equal to men, but the question is can they handle doing what the men can do on the front lines. It is well known women provide good services and do a fine jobs working up the ranks in the military. They have grown in numbers and have gained more respect in recent years by using their knowledge and skills. However, they are still not prevalent in mass numbers during fighting in battles of war. I will try to balance out the positives and negatives of this topic then give my personal opinion on this widely discussed issue. It has been longed believed that men are suppose to be the warriors and the ones who fight to protect his family or country. ...read more.

However, as America went deeper into the war, the women needed to play greater roles. They were called on to work in factories to build the weapons needed, and take more responsibilities in the medical teams. After WWII of course the civil rights movement started to grow stronger for more women rights. Women felt they could be more than just a housewife or a nurse. Some women went into the working field, while others wanted to be in the military. By the time the Gulf War started in the early 1990's there were numerous amounts of women in all areas of the armed forces. Women proved themselves to be disciplined and tough in the military, as well as sources of knowledge. Women think about things and see some situations differently than men. They can bring a new perspective to things, which helps develop better strategies in war. Women now have high ranks in all the armed forces and help protect America as well as any man. Women are also a lot more emotional than men are. This is another reason why women shouldn't be in the military, especially during times of war. They could not fight being all emotional. Once again for the maturity men can put on a tougher face and do the job without worrying what they are doing, while they are doing it. ...read more.

The army could just out number the opponent, so they could just dominate that way. It would be more intimating to fight with a lot more people than normal, and the enemy would be more likely to back down. Also something holds true about the saying "safety in numbers". It is never good to have soldiers killed in battle, but the more people you have the more people you can afford to loose without being overrun by lack of numbers. Throughout this paper I have shown some of the positive and negative aspects of women in the military, especially women going into war. After researching this topic I have developed my own opinion on this issue. I now believe women are needed in the military to perform several jobs, but I do not feel they should be in battle. There are a number of opportunities to take advantage of in the military, where one will never have to go to war. People can work with intelligence agencies, on the medical staff, scientists, or professional jobs such as doctors, lawyers, or journalists. Women can filll the need for these jobs and others just as well as a man could. However, I believe in the traditional thinking that women should not be in battle. I also don't think they have the physical capabilities to handle war. There are some that could, but war is too physically and emotionally demanding for the maturity of women to handle. ...read more.