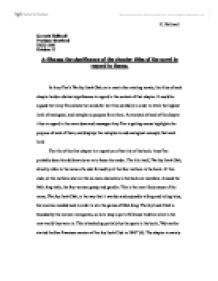 Discuss the significance of the chapter titles of the novel in regard to theme in Amy Tan's The Joy Luck Club.

Garreth Halliwell Professor Southard EG13 1091 October 11 A-Discuss the significance of the chapter titles of the novel in regard to theme. In Amy Tan's The Joy Luck Club, as in most other existing novels, the titles of each chapter holds a distinct significance in regard to the content of that chapter. It could be argued that Amy Tan selects the words for her titles carefully in order to attain the highest level of analogical, and metaphoric purpose from them. An analysis of each of the chapter titles in regard to the main ideas and messages Amy Tan is putting across highlights the purpose of each of them, and displays the metaphoric and analogical concepts that each hold. The title of the first chapter is a repetition of the title of the book. Amy Tan probably does this deliberately so as to focus the reader. The title itself, The Joy Luck Club, directly refers to the name of a club formed by all the four mothers in the book. At this club, all the mothers who are the co-main characters in the book are members. Around the Mah Jong table, the four women gossip and gamble. This is the most likely cause of the name, The Joy Luck Club, in the way that it was fun and enjoyable talking and telling tales, but one also needed luck in order to win the games of Mah Jong. The Joy Luck Club is founded by the women immigrants, so as to keep a part of Chinese tradition alive in the new world they were in. This is backed up partially by the quote in the book, "My mother started the San Francisco version of the Joy Luck Club in 1949" (6). ...read more.

This title is used to reflect the troubled marriage of the daughter in this story, and the loss of a little boy. The author is focusing on the area of human behavior that leads to events caused by our unlimited expectations and ignorance leading to inattention. The title has no sense of physically describing anything in the story, as in previous chapter titles. The next chapter is a story of a child, whose mother forces her to learn the piano, in the hope of her becoming a prodigy. This chapter is entitled Two Kinds. As a title it holds little significance physically until the end where the daughter finds two halves to a piece of music she once played, "And after I played them both a few times, I realized they were two halves of the same song"(155). In relation to theme, the title holds a strong relation to the main points of emotional duality that the author is touching on. The main idea, being, the two sides of a mind that see things from different perspectives. There is the side that always an endless capacity to desire, and the side that makes us grateful for what we already had. This is summed up in the book, ""Pleading Child" was shorter but slower; "Perfectly contented" was longer but faster"'(155). This supports the idea of the daughter of the seeing the two sides of her life as a child, the way she saw it then, 'Pleading Child', being pushed around and wanting more than she had, and the way she sees it now, 'Perfectly Content', she realizes she had a good mother and a good life. ...read more.

How we are nice to some one to them, and nasty to them when they are not around. This is explained in the book, "It means we're looking one way, while following another. We're for one side and also the other. We mean what we say, but our intentions are different"(304). This is a trait of humanity, and a necessary one in some circumstances. So in regard to the theme, the title holds significance in the way that it is using a term that describes a characteristic of human conduct. The last chapter title, as with many in the second half of the book has little significance to the theme of the story. The name A Pair of Tickets, is really just a physical explanation of what to expect I the story, in which a daughter and her father fly to China from America. Two tickets, two people, and a logical choice for representation of the plot in the story, however not for any thematic reasons. This is also a good selection of title by Amy Tan, as it rounds the book off, as the first chapter is about the woman getting tickets to meet her family, the last is about her using the tickets. Overall, Amy Tan has used a wide variety of chapter headings, ranging from ones with deep analogical, metaphoric, and thematic meanings, others with simple physical pointers to events in the story. The selection and timing of the headings also leads to provoking a strong thought process of the reader as to the author's intentions with the names of her chapters. Amy Tan has written a clever, thought inciting book, which although at times is exceedingly boring, is still none the less an intelligently written piece of literature. G. Halliwell ...read more.