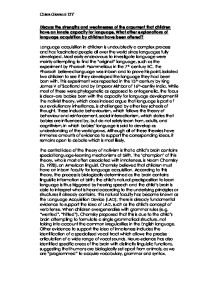 Language acquisition in children is undoubtedly a complex process and has fascinated people all over the world since languages fully developed. Most early endeavours to investigate language were mainly attempting to find the “original” language, such as the experiment by Pharaoh Psammeticus in the 7th century BC. The Pharaoh believed language was inborn and to prove his point, isolated two children to see if they developed the language they had been born with. This experiment was repeated in the 15th century by King James V of Scotland and by Emperor Akhbar of 16th-centiry India. While most of these were phylogenetic as opposed to ontogenetic, the focus is clear- are babies born with the capacity for language development? The nativist theory, which does indeed argue that language is part of our evolutionary inheritance, is challenged by other key schools of thought. These include behaviourism, which follows the theory of behaviour and reinforcement, social interactionism, which states that babies are influenced by, but do not solely learn from, adults, and cognitivism, in which babies’ language is said to develop as understanding of the world grows. Although all of these theories have immense amounts of evidence to support the corresponding ideas, it remains open to debate which is most likely.

The central idea of the theory of nativism is that a child’s brain contains special language-learning mechanisms at birth. The ‘champion’ of this theory, who is most often associated with innateness, is Noam Chomsky (b. 1928), an American linguist. Chomsky believed that children must have an inborn faculty for language acquisition. According to this theory, the process is biologically determined as the brain contains linguistic information at birth; the child’s natural predisposition to learn language is thus triggered by hearing speech and the child’s brain is able to interpret what is heard according to the underlying principles or structures it already contains. This natural faculty has become known as the Language Acquisition Device (LAD). There is already fundamental evidence to support the idea of LAD, such as the child’s concept of verb tense. When children overgeneralise with grammar rules (e.g. “wented”, “hitted”), Chomsky proposed that this is due to the child’s brain attempting to formulate a single grammatical structure, not taking into account the common irregularities in the English language. Other evidence to support the idea of innateness includes the identification of a specialised vocal tract which allows the precise articulation of a wide range of vocal sounds. Neuro-science has also identified specific areas of the brain with distinctly linguistic functions, suggesting that humans are biologically set apart from animals, as we are “programmed” to acquire vocabulary, grammar and syntax. Creole speakers, who turned pidgin into a full language, and children who use sign language, both go through similar stages of LA as “normal” children, suggesting too that the human brain actively searches for any form of language.

There are, of course, many limitations of the nativist theory. Not only was Chomsky primarily interested in grammar, he neglected to take into account the interaction between children and their carers, which is essential in explaining why a child might want to speak or the functions of language. The aforementioned studies on isolated children all produced the same result: the children did not develop language. Some “babbling” sounds were seized on and reported to belong to languages such as Hebrew, but this is mainly due to the phylogenetic nature of these studies. Additionally, the very famous Bard and Sachs study of a boy named Jim in 1977[1] goes some way to disproving that innateness is the only theory needed to explain LA.

While there must be some truth in the behaviourist theory, there is overwheleming evidence against it. Language is based on a set of structures or rules which are impossible to work out and remember simply from imitation. Virtuous errors made by children practising speech reveal that they are not simply copying an adult (some of these errors, such as “we drived to school” or “Daddy runned out” would never have been spoken by the child’s carer), but actively working out and attempting to apply grammatical rules. Additionally, children are often unable to repeat what an adult says; especially if the adult utterance contains a structure the child has not yet started to use: a classic example comes from the American psycholinguist David McNeill in 1966.[2] Moreover, few children actually receive specific grammatical correction- parents are generally more interested in correcting the truth or politeness of the sentence. There also seems to be a critical period for acquisition of the mother tongue, in that children who have not acquired language by the age of 7 will never entirely catch up. Otherwise, argue critics of behaviourism, anyone could learn any language simply from repetition, which of course is not the case.

The cognitive theory describes LA as part of a much wider growth in knowledge and understanding in children; it cannot stand alone but must only develop as knowledge and understanding of the world does, which differs from the nativist theory. The Swiss psychologist Jean Piaget argued that language must be placed within the context of a child’s mental development: the child must be able to fully understand a concept before s/he can acquire the particular language form which expresses that concept. A good example of this seriation- there is a point in a child’s intellectual development when s/he can compare objects in terms of size. Piaget suggested that a child who could not yet do this would be unable to learn and correctly use comparatives like “bigger” or “smaller”. The idea of object p0ermaneance plays a part too: once a child realises that objects and people exist even when out of sight, a huge leap in conceptual understanding and language development (primarily pronouns) follows.

While the cognitive theory is one of the most popular to date, there are limitations. During the first 18 months of a child’s life, connections such as the abovementioned are relatively easy to trace, but after this point, it becomes harder to find clear links between language and intellect. Cognitivism, too, does not explain children who speak fluently despite having abnormal mental development, suggesting that while this theory may go some way to placing the different stages of LA, it does not explain it all.

In contrast to Chomsky’s ideas, more recent theorists have stressed the importance of the language input children receive from their care-givers. Social interactionists suggest that interaction with a child is vital to help them develop a grasp of not only the meanings of words, but context, ambiguity and non-verbal communication too. Jerome Bruner, the theorist most closely associated with this theory, describes interaction as “scaffolding” a child’s development and called his system the Language Acquisition Support System (LASS). According to interactionists, parents have meaningful conversations with their children even before the latter learn to speak: the type of English mothers use, previously dismissed as “baby-talk” has been dubbed “motherese” due to the complex structures it uses (for example, a strong emphasis on personal pronouns and nouns while “fatherese” puts more emphasis on gaining information and so uses more direct questions) and is specially adapted to support the acquisition process.

The theory of social interaction may be a useful correction to Chomsky’s early position, and while it does seem likely that children learn more quickly with frequent adult interaction, it must be remembered that there are many cultures in which adults do not adopt special ways to talk to children, so “motherese” and “fatherese” are useful but not essential. This theory too does not place enough emphasis on the learning of syntax, grammar and semantics, meaning that only the behavioural side is covered here.

While it is clear that all four theories of LA have their own evidence for and against them, the theory of innateness is especially detailed with regards to learning the rules and structures of the mother tongue. Chomsky’s LAD system remains at the centre of the debate about LA. However, it has been modified, by both Chomsky himself and by others. Originally, Chomsky suggested that the LAD contained specific knowledge about language, while his fellow nativist Dan Slobin has proposed that it may be more like a “process mechanism- a set of procedures and inference rules [used] to process linguistic data…The linguistic universals, then, are the result of an innate cognitive competence rather than the content of such a competence.” (Russell, 2001). However, students of LA have concluded that while all the theories together go some way to explaining how children pick up their mother tongue, none of these seems to explain why children want to speak, or the speed at which this is achieved.