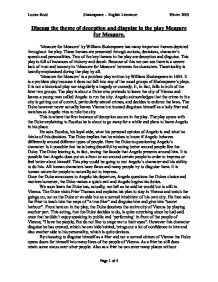 Discuss the theme of deception and disguise in the play &quot;Measure for Measure.&quot;

Discuss the theme of deception and disguise in the play Measure for Measure. 'Measure for Measure' by William Shakespeare has many important themes depicted throughout the play. These themes are presented through actions, decisions, character's speech and personalities. Two of the key themes in the play are deception and disguise. This play is full of instances of trickery and deceit. Because of this we can see there is a severe lack of trust and honesty in 'Measure for Measure' between the characters. Theatricality is heavily emphasised during the play by all. 'Measure for Measure' is a problem play written by William Shakespeare in 1604. It is a problem play because it does not fall into any of the usual groups of Shakespeare's plays. It is not a historical play nor singularly a tragedy or comedy. It, in fact, falls in both of the later two groups. The play is about a Duke who pretends to leave the city of Vienna and leaves a young man called Angelo to run the city. Angelo acknowledges that the crime in the city is getting out of control, particularly sexual crimes, and decides to enforce the laws. The Duke however never actually leaves Vienna but instead disguises himself as a holy friar and watches as Angelo tries to rule the city. This is where the first instance of deception occurs in the play. The play opens with the Duke explaining to Escalus he is about to go away for a while and plans to leave Angelo in his place. ...read more.

This image of justice being tied up is also very unnatural because it should be justice doing the imprisoning rather than being imprisoned itself. The Dukes response is that he is scared to unleash "tyranny" on the people without warning. He has disguised his feelings about wanting to re-instate the law but now wishes it to happen, however he is too scared to now. The Duke also say that "twas my fault to give the people scope". This quote is quite important because the Duke is acknowledging that this gradual descent into lawlessness and the recklessness of Vienna is his own. It appears that the Duke was attempting to give his people a degree of freedom and independence without realising what the long-term consequences could be. It is possible that the Duke's reason for pretending to leave Vienna is psychological and that leaving Angelo in a position of authority is his first step towards freeing himself from his public role and from the blame of the cities gradual degradation. He also had to disguise his reasons for leaving from everyone. The Duke also thinks in his mind that if now he decides to enforce the law heavily he will lose respect and be the subject of "slander" from the people because he has let it slide for so long. This is why he devolved the plan to place Angelo in charge. The Duke knows Angelo is a firm believer of abstinence and does not agree with brothels and other outlawed sexual activities. ...read more.

In the original the man who was accused, represented by Claudio was actually the one hiding in disguise during the play. The scene where the Duke reveals his plans to the friar, about his disguise and the trickery involved, is a key scene and without it the structure of the play would have been totally different. The play would also not have been as understandable to the audience. The scene creates dramatic irony in the play because the audience is told that the Duke is not leaving but staying disguised as the character Friar Lodowick. The Duke as the one of the main characters in this play continually speaks in verse, though he does switch to prose occasionally while dressed as the friar. This shows a slight relaxation in his tone. Friar Thomas speaks in prose as do most of the sub-plot characters. Angelo and Isabella, as well as the Duke, all speak in verse. This shows their status and importance to the play. Everyone deceives other people in everyday life, people also deceive themselves. Everyone disguises themselves for protection and self-reassurance. This could be what the characters feel the need to do in Measure for Measure. There is a lot of deception in 'Measure for Measure' and this had been created in the characters personalities, backgrounds, actions and speech by Shakespeare. The play revolves around the idea of trickery and it is involved with every character in every situation in the play. The Duke is the main character at the centre of all this and his situation and decisions caused every occurrence in the play. Louise Rudd Shakespeare - English Literature Winter 2003 Page 1 of 4 ...read more.